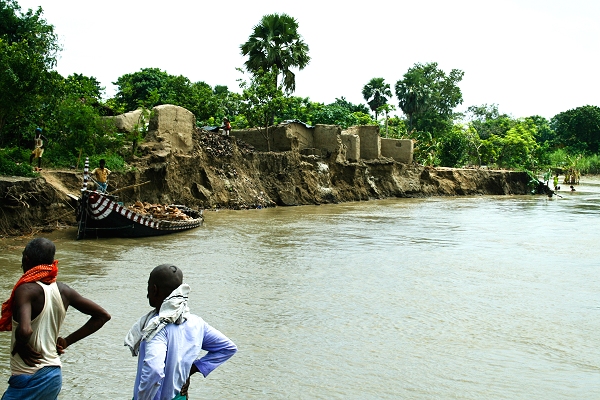 People living in the Indo-Gangetic flood plains of the Himalayas in northern India have experienced reliable monsoons. A high groundwater table has satisfied their needs for irrigation and household consumption.

Even the recurrent floods caused by rivers that originate in the Himalayan glaciers have been welcomed because they deposited fertile silt on their fields.

In early December, when I visited one such village in the West Champaran district of Bihar state, people shared their plans for reducing the flood risk.

They had raised the plinth of their houses and tube wells, and learnt to grow early-maturing rice varieties that were ready for harvest before the flood season.

Yet the villagers found that the risks were changing. As we sat in a semi-circle, men and women shared their worries about erratic rains, frequent flash floods and increased waterlogging.

They spoke about the changing character of the monsoons, of how there were now fewer, but more intense, days of rain.

Even the local river swelled suddenly following intense rainfall upstream. The untimely rains affected their farming cycles and they were no longer sure when to sow, irrigate or harvest.

They told how they had also lost their freshly harvested crop to a sudden, heavy downpour the year before.

The discussion then moved to the Partners for Resilience programme which now addresses multiple environmental and climate threats through integrated risk management (IRM).

In the village, we discussed how climate science projections for their region are showing a decreasing trend of monsoon rain, and this would deplete their water table.

Heavy downpours and flash floods were expected to increase and this would cause more run-off.

To protect and raise the water table, villagers must now conserve and harvest more water. They required more water storage ponds or depressions in the village to drain excess water and tackle waterlogging.

The stored water would also percolate and raise the groundwater table. Villagers agreed that demanding more tube-wells from the government was not sustainable.

Villagers also explained that the soil they were using to raise the plinth of their homes and tube-wells came from the riverside, and they realized this was causing the river to change its course – towards them.

In a couple of years a big flash flood could wash away the entire village! Obviously, there was a need to protect the river system.

Two months later, a new scientific study linked warming of the Indian Ocean to declining monsoon and falling water tables in this region.

Over-extraction of ground water for agriculture was obviously not the only reason for the fall of the water table.

It is interesting how both the IRM approach to disaster risk reduction and the scientific study arrived at the same conclusion for this region. After all, having an ear to the ground always helps!

Floods in Bihar in 2011 when homes built on river banks were simply swept in heavy floods that affected north-east India. Now the second phase of the PfR programme is helping villagers lobby for climate-smart resilience to be built into development programmes. (Photo: Vinay Sadavarte/IFRC)