ECMWF and Climate Centre team up on flash-flood forecasts 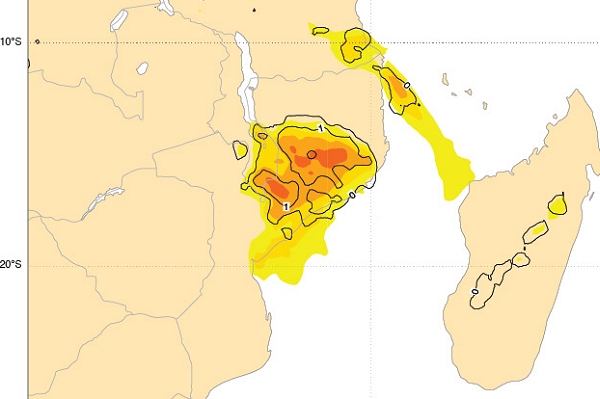 (This story appeared first Tuesday on the ECMWF website. It has been edited here for length.)

A collaboration between scientists at the European Centre for Medium-Range Weather Forecasts (ECMWF) and the Climate Centre is investigating how forecasts of flash floods can help communities likely to be affected.

Such partnership between scientists and humanitarian organizations is critical to developing an effective forecasting system, and to ensure that potential victims of flooding can benefit from life-saving forecast information.

Flash floods happen when rainfall is so heavy that the water cannot drain away and it flows rapidly across the land surface. Flood water can quickly inundate homes and buildings and carry debris in its path.

Tragically, the death toll from such events can be high, especially in less developed countries which may lack effective warning systems and have limited capacity to respond.

The deadly nature of flash floods makes them one of the priorities of the ECMWF, as part of the Copernicus Emergency Management Service.

Developing an effective forecasting service needs an understanding of how authorities and the public might use forecast information to prepare, as well as the ability to predict the physical hazard itself.

This is why collaborations with partners like the Climate Centre are so important to ECMWF as it develops forecast products for severe weather events. Calum Baugh is working on flash floods at ECMWF and is collaborating with Climate Centre Science Adviser Andrew Kruczkiewicz.

Baugh commented: “Organizations like Red Cross Red Crescent National Societies have a huge wealth of data and experience in dealing with hazards such as flash floods.

“Combining these with ECMWF forecast data gives the best chance of creating warning products which are both accurate and readily understandable.”

Initially the partners in this collaboration are trying to piece together a more detailed picture of the flash floods that have occurred in the past, as the observations going back in time are very patchy.

Once the historical picture of flash floods has been built up, the partners will begin to explore trends within the dataset. For example, are flash floods concentrated in particular regions or times of the year?

Then ECMWF data will be used to investigate linkages between flash-flood trends and weather variables, with the aim of identifying new ways of predicting flash floods.

Rivers tend to flood in response to rainfall over a wide area, and river waters rise relatively slowly over hours to days.

Flash floods, on the other hand, are typically caused by a sudden, heavy and localised downpour of rainfall and depend on the detailed state of the land surface. Each event tends to be unique.

Using novel ways to forecast flash floods, such as those being developed in this collaboration, could provide one way forward.

“Coupled with IRI’s experience on the seasonal timescale, we believe this is a step towards understanding the potential to link preparedness actions for flash floods to forecasts across various timescales.

“From forecast development to dissemination and action, it is important for humanitarian actors to link with scientists as much as possible. Doing so increases trust, and thus action, leading to a higher potential for decreasing impact in the most vulnerable communities.”

At all stages of the work, the partners involved will always come back to key questions. How are communities affected by flash floods? If forecast information were available, what action could communities take and how much warning would they need?

Information can also be provided about the level of confidence in a forecast, because of the ‘ensemble’ system used by ECMWF, where multiple forecasts are run from slightly different initial conditions.

If many ensemble members are pointing towards flash flood conditions, then this suggests a high level of confidence. Such information is vital to humanitarian organizations.

Ultimately the aim of the collaboration is to develop a forecast-based financing system for flash floods.

ECMWF forecasts suggested unusually heavy rainfall over Malawi and Mozambique on 12 January 2015, indicated by the orange/red areas in the chart. This was largely consistent with the onset of heavy rains which led to subsequent flooding. (Image: ECMWF)