2.4 million Kenyans could be food-insecure by April 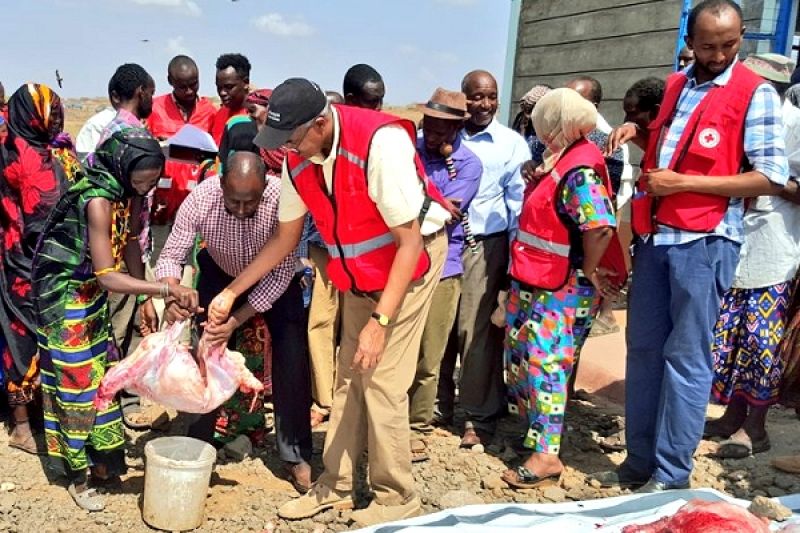 (This story appeared first on the IFRC news site on Friday and has been edited slightly here for length. KRCS Secretary General Dr Abbas Gullet and a Red Cross team yesterday toured one of the areas worst hit by drought, Marsabit county, Kenya’s largest, together with its governor, Ukur Yattani. “What needs to be done now,” Dr Gullet told reporters covering the trip, “is to put all our resources together as a nation to address the needs of the most vulnerable in this community.” The KRCS leader and Red Cross personnel later assisted with humanitarian destocking work, pictured here. He said some 75 per cent of the 1 billion-shilling Kenyan drought appeal would go on cash or food vouchers.)

The Kenya Red Cross Society (KRCS) has urgently appealed to all Kenyans, partners and stakeholders to help tackle the ongoing drought crisis in Kenya, which has left 12 counties at an alarm stage and 11 counties at an alert stage.

The situation is likely to deteriorate, rendering 2.4 million people food insecure by April if no urgent and appropriate action is taken.

The KRCS has issued a revised drought appeal to reach 340,786 people in 13 counties, at an amount of 1 billion Kenyan shillings (about US$9 million).

“In December 2016, we had eight counties at the alarm stage and in less than a month since then, the number of counties has risen to 12. This should worry us all,”

The situation is likely to deteriorate

The assistance requested will focus on interventions in five key areas. The funds will be used to treat malnourished children, pregnant women and lactating mothers in ten counties.

There will also be direct cash transfers to 17,500 food-insecure families, and where markets are functional. Food vouchers will be given to 7,500.

In addition, there are plans to rehabilitate key communal watering points in 51 communities, where increased water pumping is causing breakdowns.

Animal offtake and slaughter is targeting weak animals likely to die due to drought, making meat available to families and cushion farmers from massive losses.

The late onset and inadequate short rains – between October and December 2016 – has led to poor pasture and inadequate water resources in pastoral areas, which has further resulted in unseasonal migration in areas like Narok, Kwale and Taita Taveta and Tana River counties.

Coastal counties that have in the past served as pasture reserve areas have been severely affected, straining the situation further.

Drought-related livestock deaths are on the rise, negatively impacting on livestock farmers’ income and access to animal products.

“We have been working with the Red Cross Movement partners, national and county governments, the corporate sector and local partners to mitigate the situation. However, more support is needed, hence our decision to appeal to Kenyans for support,” added Dr Gullet.

The funds raised will be distributed to the worst-affected families and communities, through a Cash Transfers Programme that empowers them financially to meet their immediate food, non-food, and income needs.

KRCS has been transferring cash on a monthly basis to families in Marsabit, Kilifi and Tana River counties. So far, 4,200 families have received cash transfers.

Cash transfers offer families the flexibility and choice to purchase their preferred foodstuff from local traders and therefore supports local markets and recovery of livelihoods.

So far, 882 goats and sheep and 651 heads of cattle have been purchased, inspected, slaughtered and distributed to vulnerable families in Tana River and Garissa (Ijara) counties.

KRCS has also distributed a total of 280 metric tons of assorted food to 15,954 people in Samburu, Lamu, Kwale and Kilifi counties.