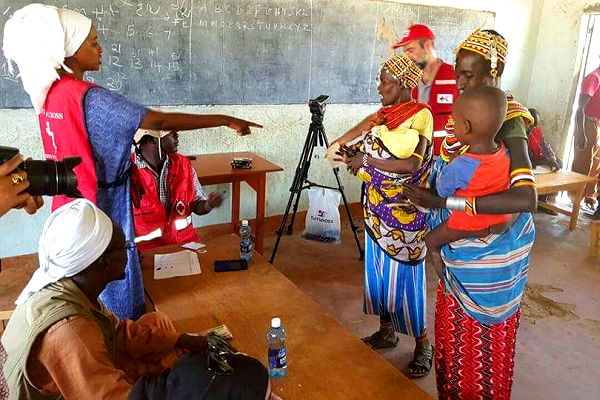 With about half of Kenya now affected by drought, the Secretary General of the Kenya Red Cross Society (KRCS), Dr Abbas Gullet, has said the situation could approach “a full-blown emergency, which means more people will need assistance”.

He was speaking on Kenyan NTV late last week and some of his comments were later tweeted by the National Society. But he added: “If we respond now we can avert a crisis.”

Kenya’s Cabinet Secretary for Devolution and Planning, Mwangi Kiunjuri, at a news conference earlier this month detailing the government’s response that is now being scaled up, said “the number of people in need of assistance is likely to rise significantly beyond the 1.5 million already affected to over 2 million”.

Counties causing concern had risen from five to 11, Mr Kiunjuri said, and the government was setting aside 9 billion shillings (nearly US$90m) for humanitarian operations this month and next.

‘If we respond now we can avert a crisis’

At the request of the KRCS, the International Federation launched an emergency appeal for nearly US$4m in November with a grant of emergency cash of nearly US$300,000.

Planned Red Cross operations centre on health and care, water and sanitation, hygiene, livelihoods, nutrition and food security, and disaster risk reduction; but the appeal is currently only 14 per cent funded by international donors.

In one of its own drought interventions, the KRCS is providing cash assistance to nearly 1,000 badly affected households in northern Marsabit county, on the Ethiopian border.

It’s “among the 11 counties that have experienced three failed rainy seasons and are at an alarm stage of drought classification,” according to a report last week by Florence Ogola of the KRCS.

“The situation has greatly affected the community members’ livelihood since they are dependent on their livestock,” she added.

The four-month cash transfer programme, which runs until April and is supported by the Danish Red Cross, will enable the National Society to assist people suffering severe to moderate malnutrition, disability or extreme poverty, and orphans.

“This approach is informed by the fact that when an individual is given cash they have a choice, meaning they can buy a variety of foodstuff depending on their preference which sometime varies from one culture to the other,” said Talaso Chucha, who manages the KRCS Upper Eastern region.

For the IFRC Florence Ogola also last week reported on a KRCS destocking programme in which the National Society buys pastoralists’ weak livestock for slaughter before the animals become completely emaciated or die, distributing the meat to particularly vulnerable households.

“The beef I received today will feed my household for at least three days,” she quoted Shukry Abdullahi, 22, of Dukanotu village, as saying.

“You know, my co-wife died last year and left behind six children who are currently under my care,” Abdullahi added, which left ten children in her household, three of them under five.

The destocking programme began last month in the North Eastern and Coast regions.

Scientists at the IFRC’s forecasting partners at the International Research Institute for Climate and Society say the 2016 Pacific ‘La Niña’ cooling phenomenon – which persisted through December – typically reduces rainfall in parts of East Africa from November to March, among its other global impacts.

Drought in Kenya is likely to have been fuelled by a complex combination of this and the ‘Indian Ocean Dipole’, relative cooling off the Horn of Africa during the last half of 2016, which also tends to inhibit rainfall in East Africa; this factor was flagged by the Kenya Meteorological Service (KMS) in its own monthly forecast for December.

The 2016 October–December short rains were “generally poor over several parts of the country”, the KMS said, especially in the north and some central parts.

Taking forecast dry weather for this month into account, potential impacts in the near future highlighted by the KMS include a worsening of the drought in the north and a reduction in grazing, declining water resources in the north as well as some south-east lowlands, and a danger of heatwaves and dust storms.

27 January 2017: The Kenya Red Cross Society has urgently appealed to all Kenyans, partners and stakeholders to help tackle the drought crisis, saying the situation is likely to deteriorate and as many as 2.4 million people could be food insecure by April without urgent action, the KRCS reports. The National Society issued a revised appeal for some US$9 million to reach more than 340,000 people in 13 counties, including cash assistance. The KRCS has been transferring monthly cash to more than 4,000 families in Marsabit, Kilifi and Tana River counties (pictured). (Photo: KRCS via Twitter)