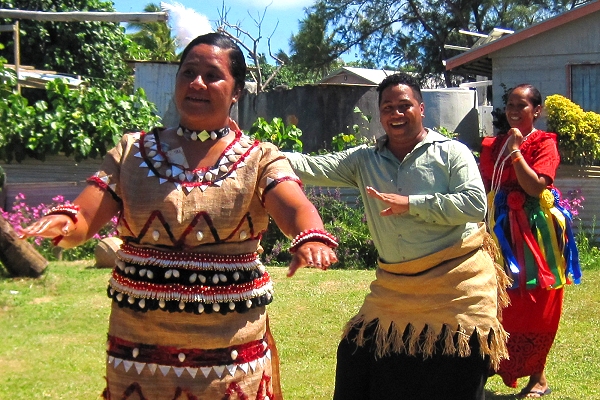 (This story, edited slightly here for length, first appeared on the IFRC news site on Friday.)

A three-year project to reduce Pacific nations’ vulnerability to the effects of climate change has just wrapped up after being successfully implemented in eight countries.

The Finnish-Pacific Project or ‘FINPAC’ was funded by the Government of Finland and coordinated through the Secretariat of the Pacific Regional Environment Programme and the IFRC.

It was implemented in one community in each of eight countries: the Cook Islands, Kiribati, the Marshall Islands, Samoa, Solomon Islands, Tonga, Tuvalu and Vanuatu.

In Tonga, remote Mo’unga’one island was chosen for the project. The island community of 104 people was badly affected by Tropical Cyclone Ian in January 2014.

The project helped villagers set up a disaster committee, provided first aid and emergency response training, installed radios, a risk map and a siren, and it also created an evacuation route.

‘This project will save lives in the future’

“We are so encouraged by the FINPAC project which enables us to fulfil our duty to the community and the people of Mo’unga’one,” he said.

In Tuvalu the project helped the people of Teone community increase their knowledge of hazards and climate risks and what they can do in order to minimize their vulnerability.

“The project has also strengthened the working relationship that the Red Cross has with the Tuvalu Disaster Relief Unit and Met Services,” said the Tuvalu Red Cross Society’s Climate Change and Disaster Management Officer, Tusi Finikaso.

In the Cook Islands, tsunami signs were installed and the evacuation plan was tested with two simulation exercises.

Two cyclone evacuation centres were also upgraded and a community disaster committee is now in place.

Noel Sanau of the Solomon Islands Meteorological Service said the most significant change was its visibility, which helped increase community understanding of weather information.

The IFRC’s Disaster Risk Reduction Manager, Lesu Waqaniburotu, said the project was a great success and it was gratifying to see the real differences it made to many people’s lives.

“This project will save lives in the future. All eight communities installed early warning systems,” he said.

“It’s a practical step they took which was a cheap effective way to make sure everyone is warned when a disaster is imminent.”

The map incorporates information from community workshops supported by FINPAC to improve the lives of Pacific islanders through effective weather, climate and early-warning services. It correlates windspeed and graphic representations of land and sea conditions.

The FINPAC workshops were said to have helped VMS staff and residents agree information needs for early warning at the community level.

Tongan dancers celebrate the handover of the FINPAC project on Mo’unga’one Island with a traditional performance. (Photo: Catherine Harris/IFRC)