‘Dissolving disasters’ in Madagascar: climate games for a vulnerable nation 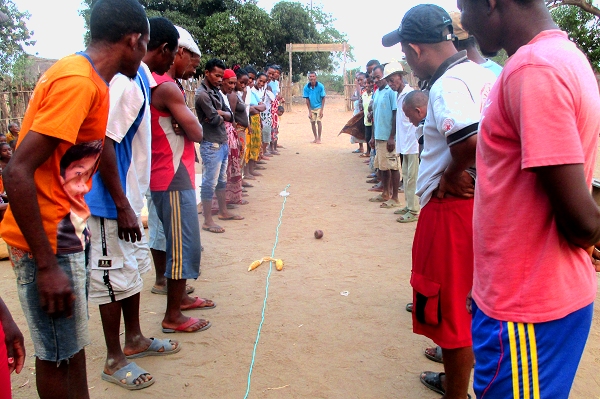 The Fagnavodrevo project in Madagascar’s north-west Sofia region is being implemented by the Malagasy Red Cross (MRC) and supported by the German Red Cross, and is aimed at strengthening the resilience and disaster management capacity of 23 communities and more than 30,000 people in an area prone to floods and cyclones.

Fagnavodrevo (Malagasy for ‘saving the vulnerable’), begun in 2013, organizes disaster simulations and field schools for farmers, for example, and distributes equipment including canoes and warning flags, and holds regular training sessions on health, nutrition and climate adaptation, among other interventions.

Raising awareness about changing patterns of disaster risk and climate impacts is seen as crucial in Madagascar – a ‘V20’ country vulnerable to climate impacts.

The MRC teamed up with the Climate Centre in adapting climate games for the local context to enable community members to ‘experience’ climate impacts in a safe environment and develop their own solutions.

‘Games are a good vehicle to
communicate complex messages’

As extreme-weather events in the games unfold with the help of frisbees, balls and dice, community participants compete to avoid disasters against the backdrop of an ever-changing and unpredictable climate.

They practice the transmission of forecasts with a game called ‘Climate Message’, for example, while Dissolving Disasters encourages local people to adapt their choice of crop choices as rainfall patterns become less predictable.

“At first it was quite a challenge to adapt the games to represent the different realities and conditions of every community,” said Didier Heriniaina, in charge of disaster risk reduction for the MRC Fagnavodrevo project.

“But after three months, at least 1,300 community members had participated in the games, while 80 Red Cross staff and volunteers had learned how to adapt and facilitate them.”

The country’s south is currently dealing with a fifth consecutive year of failed rains, aggravated by the severe 2015–16 El Niño.

An estimated 65,000 people are “severely food-insecure” and in need of immediate assistance, according to a 2016 joint assessment by the Ministry of Agriculture, the UN Food and Agriculture Organization and the World Food Programme.

In the north, meanwhile, the rainy season is due and Red Cross volunteers are preparing for possible flood-relief operations.

Last February, floods hit three of Madagascar’s northern regions and affected more than 30,000 people, according to the French Red Cross–PIROI platform of which the MRC is a member.

For Fagnavodrevo communities, games revealed different levels of awareness of climate issues: some had already established efficient structures to collaborate and face the challenges of climate impacts.

In playing the games, communities “identify how to better organize themselves and learn how to support vulnerable members when preparing for or reacting to disasters,” explains Didier.

MRC water and sanitation engineer Tovohery Randriamihamina observes that the games encouraged communities to work together for the success of harvests and diversify their production where appropriate, to simultaneously prepare for floods, droughts and other extreme-weather events.

“Games are a good vehicle to communicate complex messages,” he concludes.

*Nadine Kueng was a Climate Centre intern in Madagascar for four months last year, working with the Malagasy Red Cross to assist with games for risk reduction in Fagnavodrevo. This was a part of her studies for a master’s degree in international humanitarian action at Uppsala University in Sweden.