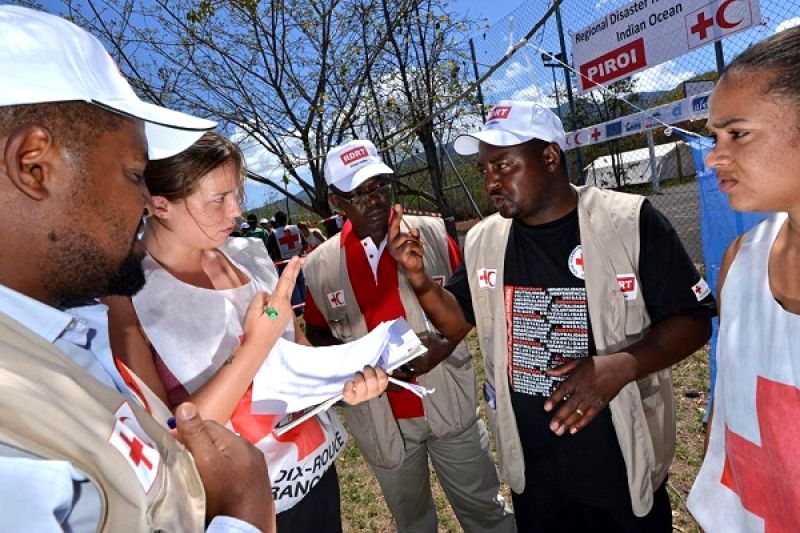 The Red Cross Red Crescent Indian Ocean Regional Intervention Platform – known by its French acronym ‘PIROI’* – and the Climate Centre last month signed an agreement to work together to prevent, prepare for, and respond to climate-related disaster.

PIROI, set up in 1999 and led by the French Red Cross, groups National Societies and branches of (alphabetically) Comoros, Madagascar, Mauritius, Mayotte, Mozambique, La Réunion, Seychelles and Tanzania, as well as the IFRC and ICRC.

The south-west Indian Ocean group and the Climate Centre will now collaborate on joint activities and share research data in a bid to increase humanitarian effectiveness in the face of disasters and generally rising climate risk.

They will also pool resources in work to raise the awareness of vulnerable population groups to disaster risk and climate change through education and outreach.

The new partnership was agreed just ahead of a week-long regional training session on climate that ended last week and included at least 20 participants from National Societies, as well as and seven PIROI and two Climate Centre personnel.

The workshops were held in the Réunion offices of Météo France, whose experts also took part and which has been a PIROI partner agency since last year, sharing infrastructure and know-how. (PIROI and Météo France are also stepping up joint work on the Paré pas Paré educational project in La Réunion.)

“We small-island states are already seeing the impacts of climate change, mainly in coastal areas and with extreme events,” said Navin Mahadoo, in charge of risk reduction at the Mauritius Red Cross Society.

“Taking part in this training week has helped us understand all the technical terms and plan to make information available to the community, helping minimize disaster impacts.”

Colette Servina, Secretary General of the Seychelles Red Cross Society, said: “With this new knowledge, I feel I’m in a stronger position to defend our National Societies against hazards and climate change.”

Grace Mawalla, regional coordinator for the Tanzania Red Cross National Society, said she planned to share the new climate knowledge with colleagues, teachers and volunteers and work on creating plans for disaster prevention.

The new agreement with the Climate Centre – an IFRC reference centre hosted by the Netherlands Red Cross in The Hague – means it will provide technical support on early warning and forecast-based financing as the PIROI group expand their programmes for the managing of climate-related disaster risk in the south-west Indian Ocean.

“We have to anticipate crises, working with partners and governments to prepare people for greater resilience,” said Fatoumata Nafo-Traoré, Director of the IFRC’s Africa region, who also attended the sessions.

The training session, meanwhile, will also be helpful to National Societies wishing to engage on adaptation with their governments and other partners.

PIROI members attend Regional Disaster Response Team training in La Réunion in 2012. In its most recent climate-related humanitarian intervention, PIROI sent a team to help the Seychelles Red Cross tackle the outbreak of dengue fever that began earlier this year and had affected more than 250 people by the end of June – an operation also supported by a US$55,000 emergency grant from the IFRC. Dengue fever can be influenced by climatic factors, including changing rainfall patterns. (Library photo Agence Française de Développement via Twitter.)