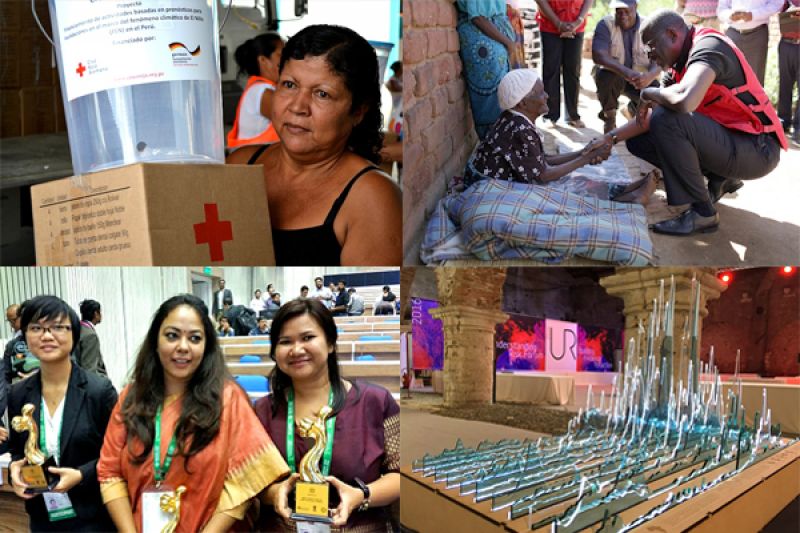 This is our snapshot of the climate-related humanitarian events of 2016, through the eyes of the Red Cross Red Crescent Climate Centre’s news service. Links are to past stories and the full archive is available here.

There was a sign of things to come in Africa when the IFRC issued an emergency appeal for US$2.2m to enable the Ethiopian Red Cross Society to support more than 35,000 people in Afar and Somali Regions struggling with severe drought aggravated by El Niño.

IFRC Secretary General Elhadj As Sy wrote in a blog for the meeting of the World Economic Forum in Davos that humanitarian need over the past decade has grown “at a staggering rate,” with more than 120 million people in need of humanitarian assistance, also calling for a longer view in the humanitarian sector and resources to strengthen resilience.

The International Federation and the Climate Centre launched a new e-learning course, Climate Change – an introduction for staff and volunteers, available online in all five standard languages.

On 1 February the World Health Organization declared a “public health emergency of international concern” because of the spread of the Zika virus.

The IFRC’s science partners at the International Research Institute for Climate and Society (IRI) said El Niño was meteorologically past its peak but still “tipping the odds for certain climate impacts” in some regions.

The economic and human toll from drought was “becoming increasingly apparent in Southern and the Horn of Africa, Central America and a number of other regions,” according to the Secretary General of the World Meteorological Organization (WMO), Petteri Taalas, while the IFRC warned that a lack of funding meant it was having to scale back activities to address food insecurity facing millions across Southern Africa.

In ongoing work with German-supported forecast-based financing (FbF) pilots around the world, the Peruvian Red Cross assisted some 2,000 families as heavy rain and flash floods blamed on El Niño swept across more than half the country’s administrative regions. A variety of interventions included fumigation against the mosquitoes that carry dengue fever, hygiene kits and drainage, and a humanitarian distribution of non-food items in the north.

The Ghana Education Service and Red Cross and the Climate Centre joined forces with UNICEF and other stakeholders to finalize a new game to highlight the importance of handwashing to schoolchildren.

A cluster of agency reports from the field, including the IFRC, emphasized that El Niño – although now past its peak – continued to be associated with major humanitarian impacts worldwide, while a combination of conflict and climate impacts was reported to be pushing Cameroon’s far north to the brink on food security.

The IFRC revised its estimates upwards and said that nearly 50 million people were expected to be food insecure across Southern Africa before the end of the year.

An article on the Understanding Risk website explored how recent increases in the temporal and spatial resolution of satellite observations is opening up new opportunities for the Global Framework for Climate Services , which the Climate centre is working on in Malawi and Tanzania.

The text of the historic Paris agreement on the global climate was signed by 175 nations at a ceremony convened by UN Secretary-General Ban Ki-moon in New York, starting a countdown on the 55-55 ‘double threshold’ for the deal to take effect.

Scientists at the US Climate Prediction Center and IRI jointly issued a ‘La Niña watch’, indicating that “conditions are favourable for a La Niña to develop in the next six months”.

The Climate Centre represented the IFRC at a meeting of the Executive Committee of the Warsaw International Mechanism for Loss and Damage Associated with Climate Change Impacts, known as ‘Excom 3’.

On the same day in April, as seasonal rains peaked, the Katakwi branch of the Uganda Red Cross Society carried out the second FbF humanitarian distribution in the country, to just over 2000 people in response to forecast flood-danger.

At the Climate Action 2016 summit in Washington, DC, Climate Centre Director Maarten van Aalst moderated a high-level session on resilience at which Shaun Donovan, director of the US Office of Management and Budget, also made a keynote address. The summit complemented momentum from Paris by focusing on action on the ground and was convened by senior figures including UN Secretary General Ban Ki-moon and World Bank President Jim Yong Kim.

The ‘Raising Risk Awareness’ initiative gathered scientists from World Weather Attribution (WWA) and the Climate and Development Knowledge Network to assess whether climate change has contributed to droughts, floods and heatwaves in several countries in East Africa and South Asia.

In one of several important IFRC statements supportive of the FbF concept, Mr Sy argued in a joint op-ed in the Huffington Post with Stephen O’Brien, the head of UN OCHA, that the international community was still nearly always geared towards response, adding that “data and risk analysis” were under-used in decision-making.

Participation at the 2016 UR Forum by the Climate Centre and the German Red Cross focused on evidence from FbF pilots in Bangladesh, Ethiopia, Mozambique, Peru, Tanzania, Togo and Uganda.

As the World Humanitarian Summit closed in Istanbul, Mr Sy told a leadership roundtable that “preparedness or lack thereof will often determine if shocks and hazards become disasters or not [and] early warning, early alert, followed by early action, will make the difference.”

“Recent studies of forecast-based financing showed highly promising results,” according to Judy Slatyer, Australian Red Cross CEO, who added that FbF was “designed so that over time the positive consequences of acting early – in lives saved and costs reduced – are greater than occasionally acting in vain.”

‘We need to invest at a much larger scale ahead of…
crises, building resilience, and anticipating shocks’

At the beginning of the month the IFRC reported that as the Pacific returned to a meteorologically ‘ENSO neutral’ state, La Niña was edging onto humanitarian radar.

WWA scientists concluded that human-caused climate change had played an important role in the heavy rains that pounded parts of France in May.

The Climate Centre and the Livelihoods Resource Centre, hosted by the Spanish Red Cross in Madrid, were the two IFRC reference centres taking part in the 2016 European Development Days in Brussels.

The three major Rome-based UN agencies specializing in food or agriculture called for combined efforts to tackle legacy impacts of El Niño to be “ramped up by governments and the international community”, saying the number of people affected could reach 100 million.

The Southern African Development Community declared a “regional disaster” and launched an appeal for US$2.4 billion to meet the humanitarian and recovery needs of millions of people affected by the El Niño-related drought.

Extreme heat made headlines around the world, with the town of Mitribah in northern Kuwait recording 54.0°C – one of the highest-ever temperatures in Asia.

The FbF team in Bangladesh joined international relief efforts undertaking cash distributions as the IFRC issued an emergency grant of just under a quarter of a million US dollars to help the Bangladesh Red Crescent Society assist people affected by severe floods after weeks of intense monsoon rainfall.

In Nairobi at the sixth Tokyo International Conference on African Development, Mr Sy called for greater investment in resilience so vulnerable families can meet future challenges, including disease outbreaks, and a special event convened by the World Bank and chaired by Maarten van Aalst emphasized “end-to-end approaches” linking improvements in meteorological services to economic decision-making.

The Red Cross Red Crescent Indian Ocean Regional Intervention Platform – known by its French acronym ‘PIROI’ – and the Climate Centre signed an agreement to work together to prepare for and respond to climate-related disaster. Set up in 1999 and led by the French Red Cross, PIROI groups National Societies and branches of Comoros, Madagascar, Mauritius, Mayotte, Mozambique, La Réunion, Seychelles and Tanzania, as well as the IFRC and ICRC.

At end of August an article on the BRACED website argued that the UK-supported programme was making big strides in improving resilience in the face of climate extremes, but “actionable climate information” was needed to provide enough lead time to prepare for extreme events.

The IFRC welcomed the ratification by China and the US of the Paris climate agreement, which brought its entry into force “a big step closer”.

Another WWA study found human-caused climate warming increased the chances of the “historic heavy-rain event” that triggered lethal floods in the US state of Louisiana by a minimum of 40 per cent.

The Climate Centre joined a workshop convened by the Malawi Red Cross in Lilongwe to discuss the latest assessment report from the Intergovernmental Panel on Climate Change and its significance for the country’s National Adaptation Plan.

On a trial flight for the FbF programme in Uganda, the first-ever deployment of a drone by the Red Cross Red Crescent in Africa revealed that a swathe of northern countryside was turning into a vast refugee camp as hundreds of people every day crossed the border from South Sudan.

Speaking for the IFRC, Maarten van Aalst told a high-level event on El Niño at the UN General Assembly: “We need to invest at a much larger scale ahead of…crises, building resilience, and anticipating shocks.”

The UN announced that the historic Paris agreement to address global climate change would enter into force on 4 November; treaty requirements had been satisfied when Austria, Bolivia, Canada, France, Germany, Hungary, Malta, Nepal, Portugal and Slovakia as well as the European Union all ratified.

The IFRC’s annual World Disasters Report 2016 argued that lack of investment in community resilience was leaving tens of millions of people exposed to “predictable, preventable and catastrophic disaster risks”.

But as if to emphasize that point, preparedness reportedly saved thousands of lives as Typhoon Haima swept across the northern Philippines.

US forecasters reinstated official ‘watch’ status for La Niña, where it remains now.

The Partners for Resilience (PfR) alliance presented a special set of key messages relevant to urban contexts at the United Nations Conference on Housing and Sustainable Urban Development – ‘Habitat III’ – in the Ecuadorian capital, Quito.

Officers from PfR country teams in India and Indonesia won two out of three categories in a film competition at the Asian Ministerial Conference on Disaster Risk Reduction 2016.

Development and Climate Days took place, as usual, in the middle weekend of the UN climate talks in Marrakech and included the first full-scale participation by the private sector, an exhibition by Moroccan women farmers battling climate impacts, and a virtual-reality experience that put the audience in the driving seat on disaster, focusing on the experience of Togo.

Amid spikes in dengue cases and the spread of Zika, the Climate Centre provided specialist input for new educational toolkits rolled out in November by Red Cross Red Crescent teams in the Americas, Africa and the Asia Pacific region to help communities prevent mosquito-borne disease.

In important statements at the end of the COP meeting, the head of the IFRC’s Africa region, Dr Fatoumata Nafo-Traore, told the its principal side-event in Marrakech that climate impacts and variability would be “with us for many, many years if we don’t take action today”, but what was missing was “dedicated resources to work on a forecast basis”; an IFRC press release said governments should put the vulnerable “front and centre” in planning on climate-related issues.

In a key statement, Dutch Foreign Minister, Bert Koenders, told the Planetary Security Conference in the Hague that the Netherlands believed water- and climate-related security problems belonged on the UN Security Council agenda, arguing that: “There is a growing consensus that climate and peace are intimately linked.”

At the fourth global ‘dialogue platform’ on forecast-based financing, hosted by the IFRC in Geneva, Germany called on other government donors to step forward to support FbF worldwide.