‘We have a weak La Niña in progress’ 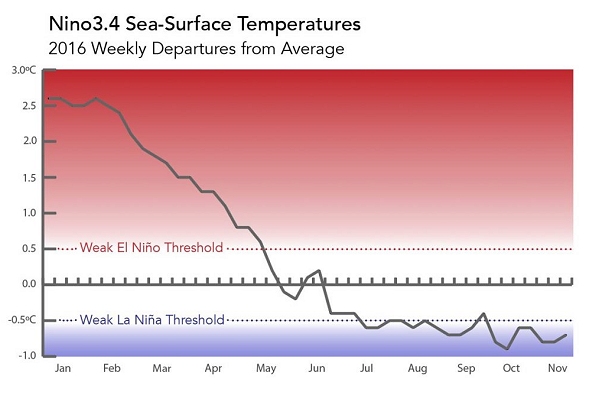 The IFRC’s forecasting partners at the International Research Institute for Climate and Society (IRI) now say oceanic and atmospheric conditions in the Pacific are such that a “borderline La Niña event” is indicated.

Earlier this month US forecasters issued an official ‘advisory’ under the ENSO alert system, saying in their synopsis that “La Niña conditions are present” with around a 55 per cent chance of persisting through the northern hemisphere winter.

“The question is how much longer will it go on?” he added. “We expect it to last not a whole lot longer; maybe one or two months.”

In terms of potential impacts, IRI’s December–February forecast shows a “moderate to strong likelihood” of drier-than-normal conditions over the southern US and northern Caribbean; and for November–January “a strong chance of above-average precipitation” in parts of Indonesia and the Philippines.

Other regions with an elevated chance of above-average precipitation in November–January include northern South America, the west of Australia, Southern Africa and the northern US, IRI says.

Red Cross Red Crescent disaster managers can get high-resolution seasonal forecasts spanning three-month periods for their countries and regions – including possible La Niña impacts – by signing up for IRI’s notification service and following #IRIforecast on Twitter.