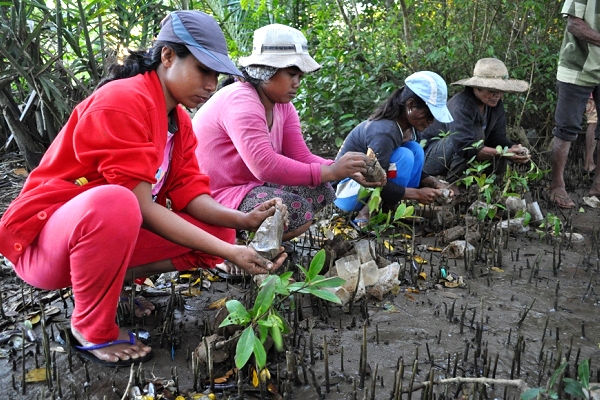 A inter-agency forum in the Philippine capital, Manila, on forecast-based financing (FbF) and emergency preparedness for climate risks has called on governments to promote better use of data as part of “a unified plan to respond to extreme shocks and events”.

A ‘call to action’ at the end of the one-day conference last Thursday also advocated the strengthening of risk management through science-based forecasting, prioritizing financial resources at the local level, and “more simplified protocols in line with FbF”.

It was organized by the World Food Programme (WFP), the German Red Cross, and the German Federal Foreign Office, which us supporting FbF pilots in a number of countries worldwide, including the Philippines.

Also attending Thursday’s conference were Eliseo Rio, Undersecretary at the Philippine Department of Information and Communications Technology, and Anna Ventura from the German embassy in Manila.

Other national and local Philippine government agencies were represented, as well as the French, Spanish and US development agencies, the UN country team, the IFRC and Partners for Resilience (the Climate Centre, Cordaid, and Wetlands International), and local NGOs and scientific institutions.

The call to action also asked scientific and research bodies to pursue “research related to FbF and its institutionalization”, and to include it in input for development planning by local governments.

Humanitarians and development organizations, it suggested, should help build “FbF mainstreaming in current government initiatives [and communicate it] to donors, development partners and the private sector”.

In closing remarks, WFP’s Deputy Country Director in the Philippines, Martin Bettelley, said the forum had seen that “huge investments are lost in emergency response, and that we should make better and smarter decisions to invest in the right resources, at the right time and in the right place”.

The Philippine government, he added, remained the “main partner” in the initiative; without it “we will not be able to make headway towards institutionalizing FbF in the country”.

The Philippine Red Cross (PRC) with its partners and PfR agencies are themselves planning to pilot flood-related FbF early next year. The PRC would “test it in a selected high-risk municipality or city,” Ana Mariquina, the National Society’s head of disaster preparedness and risk reduction, told the Manila forum.

She added that the PRC could influence government agencies “to initiate discussion of FbF institutionalization in local policies and we are interested to see how it can be applied in our own organization's preparedness and response plans and policies”.

WFP says climate change disproportionately affects the most food-insecure people around the world, and new ideas like forecast-based financing and emergency preparedness are needed to ensure scarce resources are used to greater effect.

Key components of WFP’s forecast-based financing work in the Philippines are annual dialogues involving national agencies, scientific institutions, humanitarian and development actors, communities and other stakeholders, of which Thursday’s forum was the second.

Overall, WFP “works with the government and other organizations to help the Philippines strengthen its resilience to natural disasters and climate change,” according to the agency’s website.