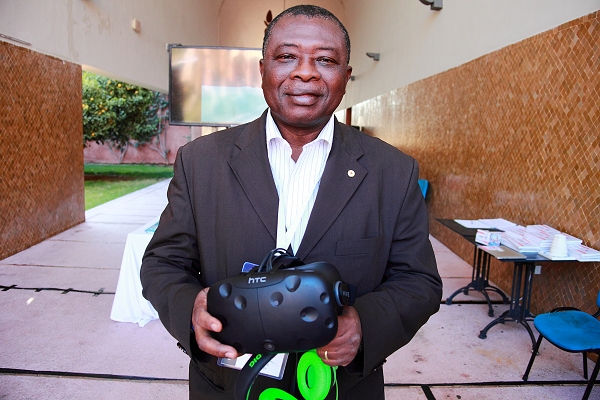 (This story appeared first on the website of the Thomson Reuters Foundation. It has been edited slightly here for length.)

As the skies open up with heavy rain and the water rises dangerously behind the Nangbeto hydropower dam in rural Togo, local authorities face a tough decision: When do you raise a warning for the flood-prone villages below and approve funds to set up relief efforts?

What if nothing happens and you’re accused of wasting money? Or if you’re not fast enough and people die?

A new virtual reality game created by the Climate Centre puts users in the shoes of decision-makers, letting them decide whether or not to ring an alarm bell, stamp papers for aid delivery, and load supplies into a relief truck – all from a virtual hill overlooking the green valley and the surging waters of the dam.

Based on three years of real hydrological data from the flood-prone West African nation, the experience aims to help users get a sense of how hard decision-making can be – and suggests how creating better prediction models and pre-authorizing aid might save money, time and lives.

“It’s an unbeatable technology to convey complexity,” says Pablo Suarez, who leads innovation efforts at the Climate Centre, and whose team developed the game alongside technology company Visyon, and with the backing of the Global Facility for Disaster Reduction and Recovery (GFDRR).

“A lot of what we do in humanitarian work depends on people deciding things they can’t experience,” he said. Technology like this can give them “emotional discovery – and intellectual insight”.

Users of the game, strapped into a virtual reality headset and earphones, and holding two wands that act as virtual hands, keep an anxious eye on the sometimes stormy skies and the surging and ebbing water levels behind the dam. When disaster looks likely, they reach out to ring a warning bell and stamp aid papers.

In some cases, a white box of relief supplies then appears and can be swiftly lifted into a truck for delivery to the flood-threatened – or perhaps by now already-village below.

But if authorities determine you’ve acted too rashly in raising the alarm, an official-sounding voice chides you for wasting money by approving aid unnecessarily.

“It’s more engaging than normal. You’re not listening to information but are actually engaged in it,” said Michele Leone of the Canada-backed International Development Research Centre, one of those who tried out the game this week at Development and Climate Days, on the sidelines of the UN climate negotiations in Morocco.

The game also points to a potential innovation in dealing with disaster risk: using rainfall and flood records to build a computer programme that learns from past experience.

Such a programme potentially could predict flooding more precisely than people, and could be set up to send out automatic flood warning alerts, for instance, when trigger points are passed, Suarez said.

After using the virtual reality equipment, he said he’d like to see a similar simulation created for earthquake risk in Nepal – perhaps with users standing on a mechanical shake table to experience what might happen inside a building if different construction codes were adhered to.

It was one Sunday night in September, with the rainy season in full swing, that Togo’s interior ministry authorized the first-ever early release of water through Nangbeto to be coordinated with humanitarian workers, adds the Climate Centre’s Janot Mendler de Suarez in Togo.

The Togolese Red Cross is among the first in the world to pilot forecast-based financing (FbF), and this was the first time that the dam was able to not only anticipate flooding but actually reduce impact downstream.

The Red Cross discussed the planned release at Nangbeto with the dam operators as the water approached overspill level, and began alerting downstream communities nearly a week before the dam opened its spillway passages on the Monday morning.

The Togo government last year trained over 1000 Red Cross volunteers to make observations of rainfall and river levels, while specialists developed a digital platform that enables them to SMS into a flood prediction tool known as FUNES (for ‘functional estimation’) that uses an innovative algorithm to ‘learn’ from this data.

The Secretary General of the Togo Red Cross, Remy Komla Afoutou, in Marrakech for COP 22 and Development and Climate Days, tried out the virtual reality ride that is partly based on Togo’s experience with early warning early action. “This helps us understand the value of innovative collaboration between science and humanitarian practice,” he said. (Photo: Climate Centre)