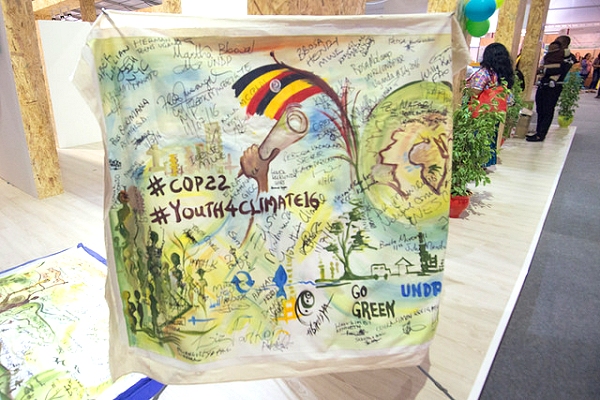 (As the UN climate talks in Marrakech approach their halfway mark with the traditional Development and Climate Days side-event weekend, Dr Maarten van Aalst examines entry points for the humanitarian sector at COP 22. He was today chairing a panel discussion at the Gulf Cooperation Council pavilion on how countries can adjust financial decision-making to build climate resilience, part of the UN Secretary General’s ‘A2R’ initiative.)

PUT AT ITS simplest, after the historic agreement on the global climate struck in Paris last December and many years of lobbying and advocacy, we now have what’s sometimes referred to in international affairs as a ‘road map’.

What don’t we have? Any firm guarantees of how far along that road we’re actually going to get.

Patricia Espinosa, UNFCCC Executive Secretary, officiating at her first COP meeting in post, was absolutely right in her opening address to say entry into force of Paris a mere two weeks ago was a cause both for celebration and a timely reminder of the high expectations placed on us all.

“Achieving the aims and ambitions of the Paris agreement,” she said, “is not a given.” And indeed it is not.

Even as the magnitude of the task of implementing Paris comes into sharp focus, the warnings from science grow steadily louder. Three examples may suffice to make the point.

Most recently this week, the World Meteorological Organization published a detailed analysis of the “increasingly visible human footprint on extreme weather and climate events with dangerous and costly impacts”.

Last month, the IFRC’s new World Disasters Report said climate had been a factor in more than 90 per cent of the disasters that affected close to 100 million people last year.

Thanks to much better preparedness and evacuation procedures in countries like Bangladesh, China, India and Mozambique, the human toll from those disasters is much lower than it was comparatively recently.

But the IFRC report also recalls that 2015 was the hottest year in modern history – continuing a yearly record-breaking trend that started in 2001.

Where is all this leading? Well, for example, our colleagues in the American Red Cross are facing the reality that over the past three decades climate change from human activity has nearly doubled the area of the continental United States burned in forest fires – a familiar hazard for Americans that the National Society makes great efforts to prepare for and respond to.

Similarly, measurably higher sea levels from climate change – one of the most demonstrable impacts of climate change – have already amplified the effect on coastal areas of Haiti of the storm surges during Hurricane Matthew.

In our language, people who live on the impoverished coasts of countries like Haiti are ‘the most vulnerable’; it is principally, though not exclusively, for them that we in the humanitarian sector project our voice on this issue.

Ultimately, it will not be the direct responsibility of organizations with humanitarian or even development mandates to turn the ambitions of Paris into immutable reality; what we can do is help to motivate and inspire decision-makers in both public and private sectors who will shoulder that burden.

To the specialist audience in Marrakech, Ms Espinosa outlined what she said were five key points – the ‘waypoints’, if you will, on the metaphorical road map ahead – and in every case we can make a contribution.

On climate finance, on nationally determined contributions to cutting emissions, on adaptation to the impacts that are now inevitable, on capacity building for developing countries, and to all stakeholders large and small, we have something to say.

To some degree or other, the global Red Cross and Red Crescent Movement is either active or vocal within all those debates, or considering how to be.

As first-responders and builders of resilience on various timescales, as entities that deal month in month out, year in year out with the humanitarian impacts of climate change, we have both the right and the duty to do that; and we will.

It can only be gratifying, too, that high-level international climate negotiators now reflect our priorities in their own language.

For a humanitarian sector facing the risking risks inherent in a warmer world, resilience is now the central operative model – the conceptual mortar that holds the bricks of community together, through multilateral initiatives like the IFRC’s One Billion Coalition and national equivalents like the UK-supported BRACED programme and the Netherlands-led Partners for Resilience.

We have argued that Paris rests on two pillars: reducing emissions to limit the global temperature rise to 2 degrees Celsius, preferably 1.5 degrees, and collectively adopting a responsibility to reinforce the resilience of the most vulnerable, wherever they may be.

Ms Espinosa echoed that when she said Marrakech must reflect “our new reality”, adding that “No politician or citizen, no business manager or investor can doubt that the transformation to a low-emission, resilient society and economy is the singular determination of the community of nations.”

A view of the ‘green zone’ for accredited members of the public at COP 22 in Marrakech, the first UN climate talks since the historic Paris agreement last December. This rests on the twin pillars of reducing emissions to limit the global average temperature and “collectively adopting a responsibility to reinforce the resilience of the most vulnerable”, argues Climate Centre Director Maarten van Aalst. (Photo: UNFCCC via Flickr)