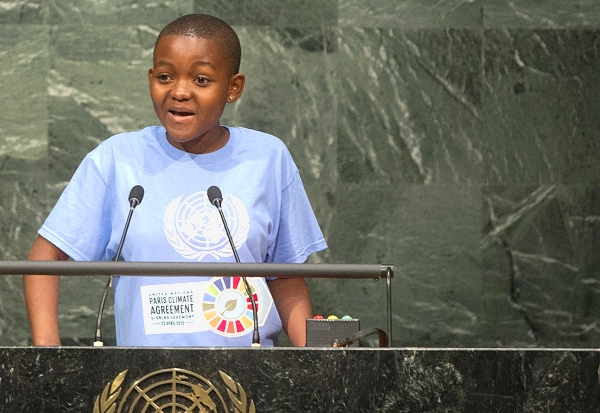 The historic Paris agreement on the global climate enters into force today Friday, becoming legally binding on the 87 states that have so far ratified it which jointly account for more than 60 per cent of global emissions.

Parties are now committed to undertaking actions and investments for a low-carbon future aimed at keeping the global average temperature rise to well below 2 degrees Celsius and ideally limiting it to 1.5 degrees.

Paris is an integral part of the 2015 Sustainable Development Goals, according to the United Nations Framework Convention on Climate Change (UNFCCC) – custodians of the global climate-negotiations process – and what “started as two agendas have merged into one bold vision of a better world for every man, woman and child.”

‘Early entry into force of Paris would have a catalytic effect’

Welcoming today’s enactment, Climate Centre Director Maarten van Aalst said there was no doubt that the rate at which the Paris deal was signed and ratified by the required number of countries came as a pleasant surprise.

“The UN’s legal experts – with understandable caution – first said only that it was ‘conceivable’ the agreement may enter into force before 2020, so by that measure we’re four years ahead of schedule.

“But the obvious breadth and scale of support for global climate action is hugely encouraging.

“Those same experts added that early entry into force of Paris would have a catalytic effect, spurring decisive action by Parties and stakeholders.

“We now earnestly hope this includes an equally ambitious push to deliver on the commitments made last year in Paris on resilience – especially through multilateral partnerships like A2R, the IFRC’s One Billion Coalition, and Partners for Resilience, all targeted at the most vulnerable people hardest hit by climate impacts today and into the foreseeable future.”

Article 21 of the Paris agreement provided for it to “enter into force on the thirtieth day after the date on which at least 55 Parties…accounting in total for at least an estimated 55 per cent of the total global greenhouse gas emissions have deposited their instruments of ratification, acceptance, approval or accession.”

The UN announced on 5 October this threshold had been crossed when Austria, Bolivia, Canada, France, Germany, Hungary, Malta, Nepal, Portugal, Slovakia and the European Union ratified.

“The Paris Agreement and the SDGs will be successful only if everyone fully supports them and helps bring their ambitious goals to life with real action,” the UNFCCC adds, “from national, regional and local leaders, from investors and businesses to citizens…”

The Emissions Gap Report 2016 from the UN Environment Programme, out yesterday, however, says the world must “urgently and dramatically” increase its ambition to cut emissions to have any chance of minimizing dangerous climate change.

Greenhouse gas emissions foreseen for 2030 will, “even if the Paris pledges are fully implemented, place the world on track for a temperature rise of 2.9 to 3.4 degrees this century,” says UNEP.

“Waiting to increase ambition would likely lose the chance to meet the 1.5-degree target, increase carbon-intensive technology lock-in, and raise the cost of a global transition to low emissions”.

The UN’s online Thunderclap ‘crowdspeaking’ platform for the Paris global climate agreement has now reached nearly 34 million social-media users with a message celebrating the entry of the agreement into force.

Gertrude Clement, 16, a radio reporter from Tanzania and youth climate advocate for UNICEF, addresses the opening session of the signing ceremony for the Paris global climate agreement at UN headquarters in New York. The 22 April event included 174 states and the European Union – far exceeding the record for first-day signatures of an international agreement and described by the UN as “an extraordinary show of support”. (Library photo: Rick Bajornas/UN)