Seeds of change: making the most of El Niño in Kenya 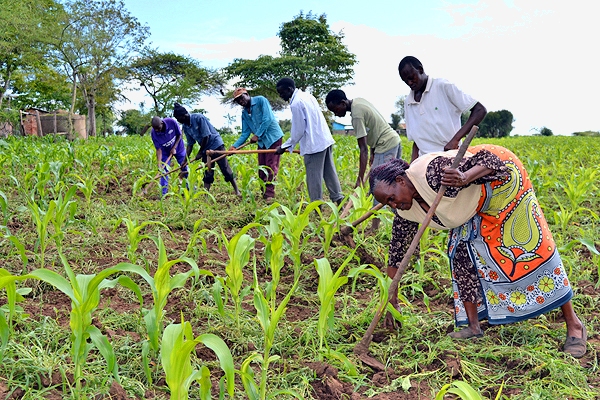 (This article appeared first on the website of the British Red Cross last Thursday 13 October, International Disaster Reduction Day, when the IFRC’s 2016 World Disasters Report was also published, and a full case study is available.)

The semi-arid landscape of Kitui County hides no secrets. Droughts in the dry season, floods during the rainy season, it’s little wonder that farmers face such difficulty growing crops in a climate that fluctuates so wildly.

Most people here do some form of agriculture, whether it’s simply growing enough food to feed their families, or to sell at market for a modest income.

Changes in weather patterns can lead to food shortages, impacting people’s livelihoods and health, so we were following El Niño very closely.

In May 2015, forecasts suggested El Niño would bring increased rainfall to Kenya, which would lead to flooding in some areas.

In September, more detailed forecasts suggested Kitui County would not have floods, but would have a good rainy season.

This gave an opportunity to harness the increased rainfall to boost crop production.

Instead of communities facing food shortages
in El Niño, they actually had a surplus

Maize is a popular crop in Kenya as it has a high nutritional value and its flour is used to make ugali, a local staple food.

We supported the Kenya Red Cross to buy 42,000 tonnes of hybrid maize seeds for farmers in Kitui County. Each farmer received a 2kg pack of seeds ahead of the rainy season.

Hybrid seeds are the result of cross-pollination between related plant varieties. The seed is healthier and suitable to a specific micro-climate.

In this instance, the seed chosen was known to do well in the wetter conditions forecast for Kitui County.

Kenya Red Cross volunteers distributed the seeds to more than 21,000 households across the county in October last year, just ahead of the rains.

Families received training on how to store their maize, helping them to avoid crop diseases. The training also included information about selling their produce at market.

Harvesting took place in March and the vast majority of households saw an increase in their crop production, which was positive news for all concerned.

After the harvest, we visited farmers across six communities to learn more about their crop yields and how they had used their harvests.

Most farmers told us they were selling their maize in small quantities to help pay for school fees, medical expenses and household items. Others invested their profits in livestock.

So instead of communities in Kitui facing food shortages due to El Niño, they actually had a surplus of food after their harvest.

As World Disasters Report has shown, working with communities to reduce risk is of critical importance at a time when humanitarian need is outstripping resources.

(A Clean Start: Can clean water and toilets really change lives in Kenya?)

Planning and investment have helped communities in Kenya benefit from rainfall linked to El Niño. The British Red Cross helped the Kenya Red Cross buy farmers in Kitui County 42,000 tonnes of hybrid maize seeds known to do well in the wetter conditions that were forecast. (Photo: Kenya Red Cross)