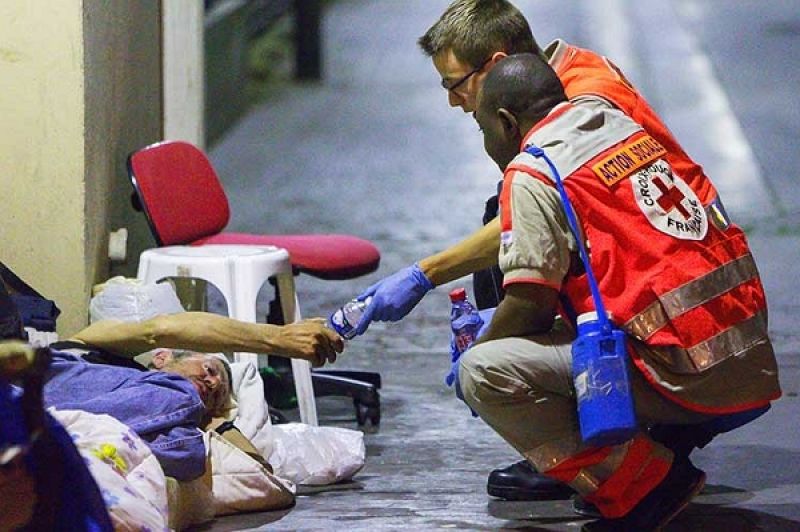 Despite recognition that such investment before disasters strike can save lives and money, it adds, for every 100 US dollars spent on aid just 40 cents goes on protecting that aid from disaster impacts.

“Investing in resilience is the best method we have for protecting the lives, livelihoods and dignity of the world’s most vulnerable people,” said IFRC Secretary General, Elhadj As Sy.

“Business as usual is no longer acceptable. It will only lead to more silent suffering and deeper poverty.

“We must work along a continuum of preparedness, early response, recovery and resilience-building.”

Forced migration, for example, is at its highest level since the Second World War: one in every 113 people globally is internally displaced, an asylum-seeker or a refugee, according to UN data cited in the report.

The number and scale of natural disasters are increasing; globalization and urbanization make health crises harder to contain; and climate change is taking its toll.

Weather-related disasters displaced on average 22.5 million people a year since 2008 – the equivalent of 62,000 people every day, says World Disasters Report 2016.

Climate was a factor in more than 90 per cent of the disasters that affected close to 100 million people last year.

The report recalls that 2015 was the hottest year since modern records began, continuing a yearly record-breaking trend that started in 2001.

Meanwhile another report, also released for IDDR, says evidence is mounting that 2016 will be hotter still.

Poverty and Death: Disaster Mortality 1996–2015 says more than 7,000 disasters over this two-decade period caused the deaths of 1.35 million people; earthquakes and tsunamis were the biggest killers followed closely by climate-related disasters.

Jointly published by published by the UN Office for Disaster Risk Reduction (UNISDR) and the Brussels-based Centre for Research on the Epidemiology of Disasters (CRED), it says weather- and climate-related disasters more than doubled over the past 40 years.

Almost as many people died in heatwaves as were killed in the Nepal earthquake, and there were 32 major droughts, compared to the annual average of 16 in the past decade.

World Disasters Report 2016 includes examples of what the IFRC believes are ways resilient communities can cope better with hazards, “from forecast-based financing and preparedness activities in Bangladesh to seed-bank building in Senegal.”

The International Federation also said today it was calling on global partners to join the One Billion Coalition for Resilience, launched late last year.

Welcoming the focus on resilience, Climate Centre Director Maarten van Aalst said that alongside the Paris climate agreement and UN Secretary General Ban Ki-moon’s ‘A2R’ initiative, “investment is now gathering pace, with global programmes like Partners for Resilience – moving into a new five-year strategic partnership with the Netherlands foreign ministry – and the UK-supported BRACED programmes, but much more remains to be done.

“The heatwave risk is changing rapidly with climate change, for example, although it’s one hazard that can be more readily tracked, as in Europe last year, with the developing science of attribution.

“And with the growing danger of droughts and floods, initiatives like German-supported forecast-based financing can leverage humanitarian efforts, making them more efficient and forward-looking amid rising risks and uncertainties.”

As delegates gathered in Paris last July for a major scientific conference that put heatwaves at the top of a list of weather extremes exacerbated by climate change, French Red Cross volunteers distributed water to vulnerable people as Europe sweltered in another dangerous example of this climate-related hazard. World Disasters Report 2016 recalls that last year was the hottest since modern records began, continuing a record-breaking trend that started in 2001. (Photo: Benjamin Vancrayenest/French Red Cross)