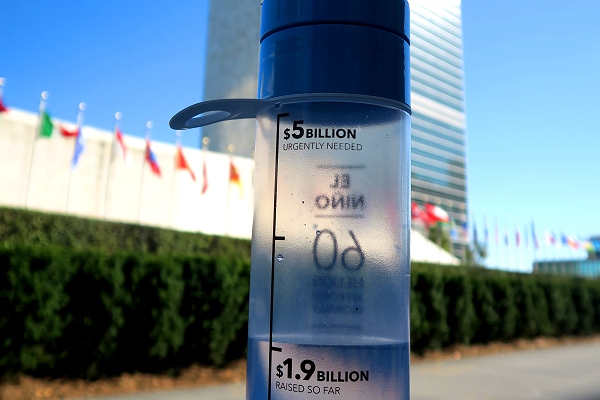 (Action to respond to disasters, prepare for them, and build resilience against shocks is finally coming together, argued Climate Centre Director Maarten van Aalst in this blog from the UN General Assembly in New York, first published by the Thomson Reuters Foundation. An IFRC press release last Sunday also called for a “radical shift in the humanitarian response to crises linked to El Niño and climate change” overall.)

The perfectly mown and manicured lawns of the University of Oxford and the air-conditioned meeting rooms at United Nations headquarters in New York are not, it has to be said, 100 per cent ‘climate-smart’.

But moving straight from the very first international conference on the science behind the 1.5°C target of the Paris Agreement to several high-level meetings on climate resilience alongside the UN General Assembly, I found myself encouraged by both the green grass of Oxford and the artificially chilled air at the UN.

A 1.5°C increase in global average temperature is not some distant possibility. As Richard Betts, professor of climate impacts at the University of Exeter, told us in Oxford, we may well pass that threshold within a decade.

Staying below it will require an immense effort to reduce greenhouse gases, and good luck with both technology and the response of the climate system to continued emissions.

And while staying below 1.5°C of warming would prevent some of the more dramatic impacts of the more likely 2, 3 or even 4 degrees, we’ll see a continued rise in climate-related hazards, and growing uncertainty about what to expect from our climate system.

The most vulnerable – as always – will be hit hardest, and the discussions in Oxford reminded us of that.

Just a day later, at the UN General Assembly building in New York, Mary Robinson, UN Secretary General Ban Ki-moon’s Special Envoy on El Niño and Climate, told delegates that the recent El Niño is but a foretaste of what will confront us more and more in a changing climate.

Those impacts ought to be very hard to ignore: at least 60 million people affected and a humanitarian bill of about $5 billion, of which only just under $2 billion has been pledged by donors so far.

Interestingly, Robinson and her co-envoy, Ambassador Macharia Kamau, made clear they wouldn’t want to just raise money for a one-off humanitarian response and then wait for the next El Niño or climate-related disaster to come around.

Instead – and here in New York was a true breath of fresh air in the normally compartmentalized international system – they opted for a “blueprint for action” that would integrate humanitarian response, preparedness and the building of resilience as part of long-term development.

The draft blueprint reflects the three areas of the Secretary General’s ‘A2R’ initiative on climate resilience that he announced at the UN climate talks in Paris last December and activated at the General Assembly: It should help ensure we can anticipate and absorb shocks and also reshape development to increase resilience. Thus two A’s and an R.

On Saturday morning we had the first meeting of the A2R leadership group, inaugurated the day before by the Secretary General. Composed of representatives of UN agencies and the World Bank, governments, the private sector, the Red Cross Red Crescent, and civil society, the group reflects the realities of resilience.

It will pursue real systemic change that no one can deliver alone, and set its ambition at the level of the Paris Agreement, including not just world and UN leaders but also local government, the private sector and civil society.

The Paris Agreement itself rests on two pillars. The first is to work together to reduce emissions to limit the global average temperature rise to 2 degrees Celsius and preferably 1.5 degrees; the second is a collective responsibility to deliver resilience, especially for the most vulnerable already facing rising risks today.

In the months since the historic Paris meeting, we have seen many commitments on greenhouse gas reduction; now we need an equally ambitious push to deliver on the commitments made there on resilience.

These are also enshrined in the Sustainable Development Goals, the Sendai Framework for Disaster Risk Reduction, and the outcomes of the World Humanitarian Summit in Istanbul; A2R coalesces them all.

There is a lot to do, not just showcasing progress in response to the high expectations on resilience before the Marrakesh global climate meeting in November, but especially in the real world to meet the needs of those still suffering from the humanitarian legacy of the 2015–16 El Niño.

So let’s spread that “fresh air” widely, and work to keep the grass green not just in Oxford but also in all those places affected by rising climate risks.

A drinking water flask given away at the high-level event on El Niño at the UN General Assembly in New York last week, neatly highlighted that only US$1.9 billion has been raised out of US$5 billion urgently needed for humanitarian relief, especially in drought-affected Southern Africa. (Photo: Maarten van Aalst/Climate Centre)