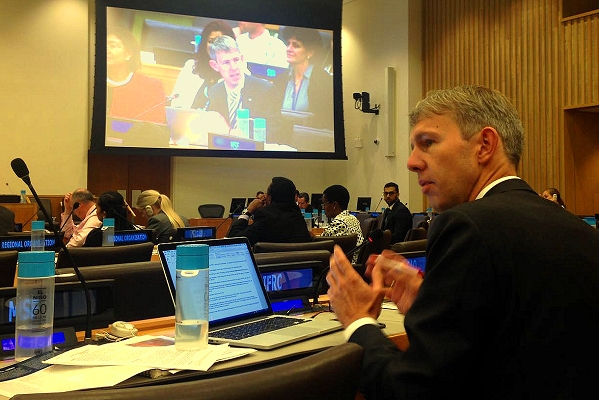 (This story is a press release issued earlier today by the IFRC.)

At the close of the high-level event on El Niño at the 71st UN General Assembly in New York, the International Federation of Red Cross and Red Crescent Societies (IFRC) called for a radical shift in the humanitarian response to crises linked to El Niño and climate change.

“We need to invest at a much larger scale ahead of these crises, building resilience, and anticipating shocks,” said Dr Maarten van Aalst, director of the Red Cross Red Crescent Climate Centre, during his address at the UNGA on behalf of the IFRC.

“We have work to do. But fundamentally, this is not about changing technical approaches – it’s about changing the politics of how we address rising risks. We must truly bridge humanitarian, development and climate agendas,” he added.

The IFRC welcomed UN Secretary-General Ban Ki-moon’s draft ‘blueprint for action’ on El Niño and climate, and its alignment with his climate resilience (‘A2R’) initiative.

In recent years, through National Red Cross and Red Crescent Societies, the IFRC has been demonstrating how the new ‘forecast-based financing’ (FbF) mechanism can make a difference, in close collaboration with governments and with the support of donors, including the German government.

“In Uganda’s Teso region for instance, a forecast-based finance pilot released funding ahead of floods related to the past El Niño,” said Dr van Aalst.

“As a result, communities had clean drinking water throughout the floods – preventing cholera outbreaks, and saving lives and money, as these operations are often very costly.”

The IFRC, through its network of National Societies and at least 100,000 community-based volunteers in Southern Africa, can lead local response – offering multi-country, long-term, community-level engagement.

Earlier this year, the IFRC committed to at least doubling, by 2018, the existing coverage of forecast-based financing mechanisms – part of a 110m Swiss franc initiative it launched in May.

The goal of this initiative is to ensure that communities in high-risk areas across Southern Africa are more resilient to natural disasters, focusing on four areas:

The plan will be implemented within the One Billion Coalition for Resilience (1BC), a global initiative to build new partnerships to support stronger, more resilient communities.

Climate Centre Director Maarten van Aalst makes the case for investment “at a much larger scale ahead of…crises, building resilience, and anticipating shocks” , on behalf of the Red Cross Red Crescent Movement, at the high-level event on El Niño at the UN General Assembly in New York. (Photo: Climate Centre)