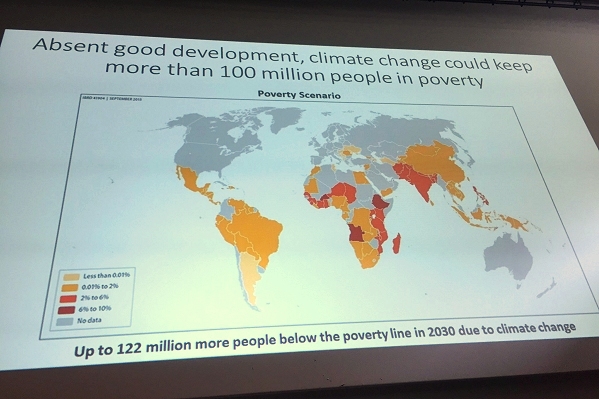 The first major international conference on the science behind the 1.5°C climate ambition agreed at COP 21 in Paris last year ended in the Oxford today.

Launched at the English university city’s town hall by the Environmental Change Institute (ECI), the conference was attended by over 200 scientists, policy-makers and business people.

They looked at ways to achieve the goal of holding global warming – in the language of Paris – “to well below 2°C above pre-industrial levels and pursuing efforts to limit the temperature increase to 1.5°C”.

“The Paris agreement was a great achievement but it was only the beginning,”’ said Janos Pasztor, Senior Advisor to the UN Secretary-General on Climate Change, shortly before the Oxford conference began.

“Governments made it clear where they would like to go, but the details of how to get there still need to be worked out…The academic community has a responsibility and an opportunity here to think outside the box and come up with new ideas on pathways and implications of rapid climate stabilization.”

Other keynote speakers in Oxford were also among the major figures involved in the Paris agreement, including Laurence Tubiana, France’s climate ambassador.

Another 31 governments on Wednesday ratified the Paris climate deal at a special event called by UN Secretary General Ban Ki-moon on the sidelines of the General Assembly in New York – bringing to 60 the number of states to have done so and crossing one of the two ‘55’ thresholds for it to come into force.

ECI Professor Myles Allen, a Lead Author for the Intergovernmental Panel on Climate Change (IPCC), said: “Scientists were surprised and impressed by the ambition of the 1.5°C goal [but if] as academics, we don’t explore the implications of these ambitious goals, then governments won’t feel confident in pushing them.

The Oxford conference was also supported by at least nine other interested bodies and will contribute to a special report on the 1.5-degree goal that the IPCC will produce in 2018.

The ECI was founded in 1991 by the University of Oxford to do interdisciplinary research and help develop “management strategies for coping with future environmental change,” according to a press release for the 1.5-degree conference.

It houses “the world’s biggest climate-prediction, citizen-science climate modelling and weather-attribution programme,” and has just launched a website with a real-time counter showing the current level of human-induced climate change to track progress to limiting warming to 1.5°C.

“The key point going forward is the relationship between science, policy and practice,” said Climate Centre Director Maarten van Aalst, also an IPCC Lead Author who addressed the conference on the human impacts of 1.5 degrees.

“To understand how to manage these impacts, the traditional approach of starting with climate models then running impact models, then looking at how to adapt, will not work,” he said.

“It’s about taking decisions now amid rising risks and uncertainties, focusing our efforts on the most vulnerable and building resilience, while also rapidly reducing emissions to avoid future risks from getting out of hand.”

A graphic presented on the first day of the 1.5-degree science conference on the ambitions underlying the Paris climate agreement by Stephane Hallegatte, Senior Economist in the Climate Change Group at the World Bank, who told participants that “development is more important than targeted adaptation” for reducing the potential impacts of climate change. (Image: Twitter)