Elhadj As Sy: For a safer future, for community resilience, ‘we must act now’ in response to Paris climate agreement 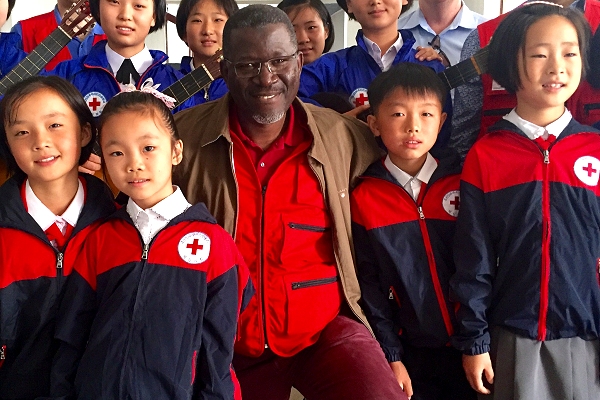 The IFRC today welcomed the ratification by China and the US of the Paris climate agreement, which brings its entry into force “a big step closer”, according to the UN Framework Convention on Climate Change (UNFCCC).

IFRC Secretary-General Elhadj As Sy described Paris as “a landmark achievement” in the fight against climate change. The announcement, he said, showed that commitment had not waned and there was willingness to respond at scale .

Speaking from the IFRC offices in Geneva, he added: “We have no choice but to deliver on the ambitions of the agreement.

“Our volunteers are on the front line of this response: They see the huge toll that climate change is already taking on the world’s most vulnerable.

“If we are to create a safer future, if we are to build the resilience of at-risk communities, then we must act now.”

For the Paris agreement to limit global warming to below 2°C to come into force, 55 states representing at least 55 per cent of global emissions must join.

The announcement by President Obama and President Xi Jinping came on the eve of the G20 summit in the Chinese city of Hangzhou and “puts the balance at just over 39 per cent of the global total” of emissions, the UNFCCC said.

The agency’s Executive Secretary, Patricia Espinosa, said: “I would like today to thank China and the United States for ratifying this landmark agreement…on which rests the opportunity for a sustainable future for every nation and every person.

“The earlier that Paris is ratified and implemented in full, the more secure that future will become.”

The Executive Director of the UN Environment Programme, Erik Solheim, quickly welcoming the US-Chinese move, said Saturday that “by putting the well-being of our planet at the top of the agenda, the two largest economies in the world are also showing that our economic future is low-carbon and green.

“The fight against climate change remains difficult and urgent, but having heavy-hitters like China and the US on your side is extremely heartening.”

Among other early reactions over the weekend, Salaheddine Mezouar, the Moroccan foreign minister and president of the forthcoming COP 22 UN climate talks in Marrakesh, said: “This is an important step towards entry into force of the agreement. The momentum for ratification needs to continue and accelerate.”

The IFRC last year called for Paris to be implemented with an eye on placing the interests of the most vulnerable at its core.

“We need to invest in their resilience, help them to adapt to the inevitable impacts of climate change and forestall future crises by promoting ambitious emissions reductions,” said Garry Conille, Under-Secretary General for Programmes and Operations.

The IFRC’s One Billion Coalition for Resilience – launched in Geneva during the Paris COP 21 meeting – is intended to enable a billion people to take active steps towards reducing the risks that affect their lives, including climate change.

Along with the Sustainable Development Goals and the Sendai Framework for Disaster Risk Reduction, Paris formed part of the vision for a sustainable future on which the international community converged in 2015.

China and the US, meanwhile, have also announced they are working together to tighten the Montreal Protocol aimed at reducing hydroflurocarbons used in refrigeration systems such as air conditioners, and have said they will back action on aircraft emissions at the meeting later this month of the International Civil Aviation Organization.

The IFRC Secretary General Elhadj As Sy welcomed the ratification of the Paris climate agreement by China and the US shortly after returning from a visit at the invitation of the country's National Society to the Democratic People's Republic of Korea, which has seen three droughts and eight severe floods in the past 15 years. “My visit to DPRK was both inspiring and concerning,” he said. “There are indeed extensive humanitarian needs, but I saw first-hand how the Red Cross is finding solutions to some of these challenges by helping communitioes to build their own resilience.” (Photo: IFRC)

(This story was updated on 7 September to include the comments by Elhadj As Sy and new photo.)