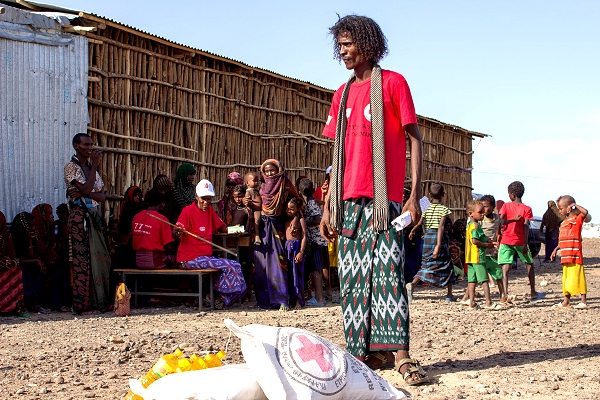 In Afar in northern Ethiopia people have been hoping, in vain, for much needed rainfall, as severe drought has ruined three consecutive harvests right across the country. More than 10 million people are in need of food aid.

The drought makes access to food difficult in this country, where up to 80 per cent of people make their living from farming.

The situation in Ethiopia has not been this severe since the mid-1980s, when famine led to more than 400,000 deaths.

“The main income and livelihood in Afar is cattle, but almost all the cows have now died. Even the goats are running out of food. The situation is very dire,” says Marjo Leppanen, IFRC logistics delegate in Ethiopia.

Cow and goat milk have been essential dietary supplements for many. With the cattle gone there is also a shortage of milk.

The shortage of grazing land for livestock is also forcing an increasing number of pastoralists to move to nearby villages in search of viable fields.

“People I have been talking to have expressed their concerns over their future and livelihoods in this region. They are very grateful that the Red Cross is here, distributing the food supplements,” says Leppanen, who is supporting the Ethiopian Red Cross Society with supplementary food distributions to the worst-hit areas.

At the end of April, the Red Cross distributed food aid for 3,000 malnourished children in Afar, as well as pregnant and lactating women.

Each person is given 12.5 kilograms of corn and soya bean blend and 2 litres of edible oil – enough to last for two months. A further distribution took place in June.

This is in addition to the food and other aid supplies distributed by the Red Cross to over 40,000 people in Afar, Amhara, Oromia and Somali Region last autumn.

“The needs of the most vulnerable are food, water, health, animal feed, and hygiene and sanitary materials,” says Frehiwot Worku, Secretary General of the Ethiopian Red Cross Society.

While emergency support is critical to saving lives, the local Red Cross is also investing in projects which will help communities build their resilience and capacity to better withstand similar situations in the future.

“I would like to appreciate and thank the support of international donors who are providing funding to support the people of Ethiopia in recovering from the effects of this drought,” adds Worku.

“Without their help the gap is too wide to fill. I encourage continued support to help us avoid loss of life in Ethiopia.”

*The IFRC has revised its emergency appeal in Ethiopia to reach more people with life-saving assistance: the latest appeal for 2.8 million Swiss francs, which is currently 56 per cent funded, aims to support more than 65,000 people, with a focus on supplementary food and clean water.