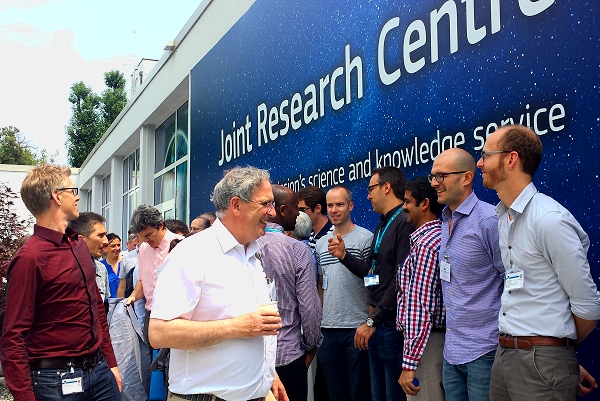 Recent operational experience from forecast-based financing humanitarian distributions in Africa and Asia was showcased by the Climate Centre at this year’s conference of the Global Flood Partnership (GFP) that ended today.

The Climate Centre also jointly convened the three-day meeting, hosted by the Joint Research Centre of the European Commission in Ispra, northern Italy.

“Each year floods cause devastating losses and damage across the world,” a brief on the GFP website said.

Population growth in coastal areas and river basins meant more people are exposed to extreme rainfall; but while governments and other agencies do invest in flood reduction, “in many countries the flood risk is not managed optimally because of lack of scientific data and methods, or a communication gap between [scientists] and risk managers.”

“These are an important few days for the development of FbF, with this meeting at the Joint Research Centre and next week’s dialogue platform at the IFRC in Geneva, supported by the German foreign ministry as part of its action plan for humanitarian adaptation to climate change.”

At the GFP, Monjane detailed operational experience in Uganda, where two humanitarian distributions have now been carried out under FbF by the Red Cross; in March at least 1100 Peruvian families living in areas vulnerable to heavy rains linked to El Niño received non-food items from the Peruvian Red Cross, another FbF operation explained at the Ispra conference.

Also on the programme was a graphical Climate Centre presentation on how national and even global forecasts can be adapted into the thresholds of local risk that ‘trigger’ humanitarian action on the ground before a disaster, and a talk on the developing use of satellite-based earth observationsfor humanitarian response after the January 2015 Malawi floods.

(In Mozambique itself, FbF standard operating procedures were this week being finalized in advance of the cyclone and rainy season later this year that could be intensified by a Pacific La Niña.)

The GFP groups scientists, flood-risk managers and humanitarian agencies working to improve flood forecasting and monitoring, track floods in near real-time, build a global record to aid risk assessment, and make all these tools available to organizations and countries that need them.

Last year’s conference was held in Boulder, Colorado; the next will be held in 2017.

Scientists and risk managers at the Global Flood Partnership meeting in northern Italy. Floods and the losses they inflict are getting worse, says the GFP, and a communications gap between scientists and disaster managers must be bridged. (Photo: Erin Coughlan de Perez/Climate Centre)