‘Abnormal is the new normal’. May sets global climate records 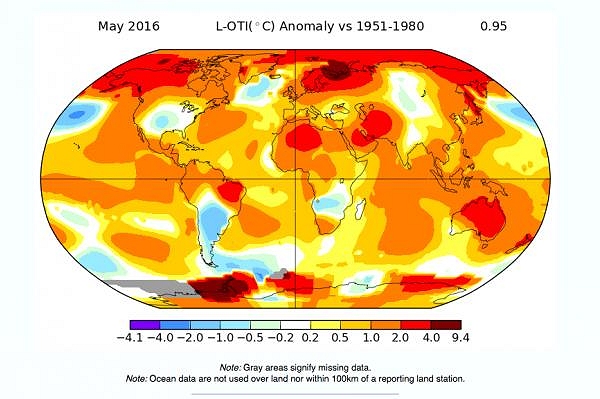 (This web story, edited here for length, appeared first yesterday on the website of the World Meteorological Organization, an IFRC partner agency.)

Global temperature records were broken yet again in May 2016, according to data just released by NASA, which also reported that it was the hottest (northern hemisphere) spring on record.

The Japan Meteorological Agency ranked May 2016 as close second to May 2015.

The heat has been especially pronounced in the Arctic, resulting in a very early onset of the annual melting of Arctic sea ice and the Greenland ice sheet. Snow cover in the northern hemisphere was exceptionally low.

The record temperatures in May were accompanied by other extreme events, including very heavy precipitation in parts of Europe and the southern US, and widespread and severe coral reef bleaching.

“The state of the climate so far this year gives us much cause for alarm,” said David Carlson, Director of the World Climate Research Programme.

“Exceptionally high temperatures. Ice melt rates in March and May that we don’t normally see until July. Once-in-a-generation rainfall events. The super El Niño is only partly to blame. Abnormal is the new normal.

“The rapid changes in the Arctic are of particular concern. What happens in the Arctic affects the rest of the globe. The question is will the rate of change continue? Will it accelerate? We are in uncharted territory.”

Advances in research and observations have increased our understanding of the climate system, and there has also been progress in the science of ‘attribution’ to determine whether a specific extreme weather event was linked to human-caused climate change or to natural climate variability.

The strong El Niño – which has now dissipated – fuelled the high temperatures witnessed so far in 2016. But the underlying cause of global warming remains greenhouse gases in the atmosphere due to human activities.

The human-caused rise in the atmospheric concentration of carbon dioxide is being given an extra boost this year by the El Niño, say a team of climate scientists led by the UK Met Office in a paper published in Monday’s edition of the journal Nature Climate Change.

As a result, 2016 will be the first year with concentrations above 400 parts per million (ppm) all year round in the iconic Mauna Loa carbon dioxide record.

Richard Betts, of the Met Office Hadley Centre and University of Exeter, is the lead author on the paper. He said: “The atmospheric carbon dioxide concentration is rising year-on-year due to human emissions, but this year it is getting an extra boost due to the recent El Niño event.

“This warms and dries tropical ecosystems, reducing their uptake of carbon, and exacerbating forest fires.

“Since human emissions are now 25 per cent greater than in the last big El Niño in 1997/98, this all adds up to a record CO2 rise this year.”

A chart showing last month’s surface temperature anomalies from a 1951–80 baseline average, issued by NASA’s Goddard Institute for Space Studies. “Abnormal is the new normal – the whole climate system is changing,” the WMO warned at a press conference in Geneva yesterday. (Source: NASA-GISS)