The hidden toll of El Niño in Timor-Leste 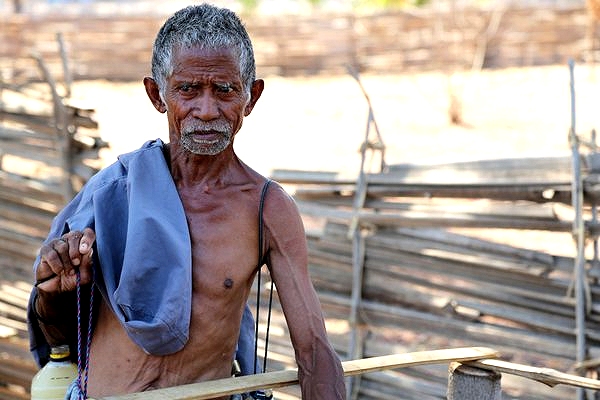 (This blog by IFRC operations manager Jesper Fridolf, from the Swedish Red Cross, edited slightly here for length, was published first on 27 May 2016 on the Asia Pacific area of ifrc.org.)

Coming back to work with the Cruz Vermelha de Timor-Leste (CVTL) (Timor-Leste Red Cross Society) after four years was a great feeling. Progress in this young country has been dramatic, but the reason for my being here wasn’t a celebratory one.

Over the past six months a slow-onset drought had caused hardship for 120,000 people across the country.

Thanks largely to El Niño, the lack of rainfall has meant failed crops, lost incomes and food and water scarcity for many.

I was temporarily relocated from my operations-manager position with the IFRC in Myanmar to work with the CVTL on scaling up their response to the drought.

Over 60 per cent of Timor-Leste’s population is engaged in agricultural production and water shortages triggered by the El Niño phenomenon are affecting the livelihoods of thousands of single-season farmers and those involved in livestock-rearing.

Almost 50 per cent of households across the country are expected to experience varying levels of food insecurity until June.

For many the loss of livestock in particular means the loss of their “banked” wealth and will have an impact on their ability to send their children to school and to pay other household expenses.

Livestock are also used for tilling the land and losses will make it harder for farmers to prepare their land for the next planting season.

Last month the IFRC launched an emergency appeal which aims to assist 20,000 people over the next 10 months in the worst drought-affected districts. The operation is led by CVTL and we aim to help in a number of ways.

Providing cash to help people meet their immediate food and household needs is one.

We are also targeting additional nutritional support to selected households, especially those with pregnant or lactating women, infants and young children.

This will be coupled with inputs such as seeds for homestead gardening as an option for growing nutrient-rich food. But as many have lost their crops we will also be looking to help them restart or diversify their income sources.

The overall aim is to build the resilience of communities through different interventions.

What I have found in Timor-Leste is a situation where the impact of El Niño, a cyclical phenomenon, has pushed people beyond their normal coping strategies.

Driving through fairly green and lush areas feels strange as there are no evident signs of drought.

A few sporadic rain storms have created a false impression. We reach one of the villages, Suco Saelari, where CVTL are assessing the impact of the drought on people’s livelihoods and local food security.

The main concern right now is that their crops have failed, both the rice and corn. They have no extra resources and even the vegetables they have planted are not producing sufficient yields.

One woman told us that she is afraid that they will have to eat the little food they kept in reserve, which will leave nothing for the next planting season.

Also, their animals have reduced in number. They say the deaths are due to the heat which made them more susceptible to diseases.

“My great fear is that we have to sell of our assets, some of which are important to our traditions”, says Jose da Costa, one of the village elders. “Animals are often kept for ceremonial purposes and are a crucial part of people’s lives in these villages.”

Jose shows off his prize rooster saying, “I don’t want to sell my rooster, even though he lost his fight today”.

The next village we visit is right by the sea. There are fishermen and farmers living here. They tell me that their crops have also failed and they hardly have any food. The little money they have left is used to buy rice.

One of the men who owns a fishing boat tells us that the fish are less this year and they have to go out further to catch anything. Paddling out so far to reach the colder waters where the fish are isn’t easy.

We talk to three women, one very old lady in her eighties, a young schoolgirl, and a woman in her forties. We ask them what they had eaten yesterday. The old lady says, “I only eat porridge made from rice and water”.

The two others say they have only rice three times a day, and maybe some chilli.

Maria, the middle-aged woman tells me, “We go to bed hungry almost every night, this is not normal we usually have enough all year around.”

El Niño has “greatly reduced rainfall, leading to drought conditions in many parts of Timor-Leste,” according to a update last week from the Australian Red Cross, the Climate Centre adds.

Red Cross assessments found many families foraging for wild plants for food and eating less frequently, while others can no longer afford to send their children to school.

Since 2002 the Australian Red Cross has helped over 62,000 people to access clean water through gravity-fed supply systems and wells in Timor-Leste, where safe drinking water is always precious.

A 2014 study found that Red Cross water systems – installed and maintained by local communities – lasted longer and functioned better than the national average.

Now drought “threatens everything Timor’s families have worked so hard to achieve,” the Australian report says.

“Red Cross also aims to help people prepare for future crises. As the El Niño cycle ends, a La Niña may begin in the coming months, which should bring much-needed rain but could also trigger disastrous floods in parched areas of the country.”

The Australian government has contributed nearly US$ 150,000 to drought relief in Timor-Leste.

This elderly Timorese villager is among many thousands who face a daily struggle to secure supplies of safe water. An IFRC appeal for drought relief launched last month will assist 20,000 people in the worst-affected areas, including cash and nutritional support. (Photos: Zayne D’Crus/Australian Red Cross)