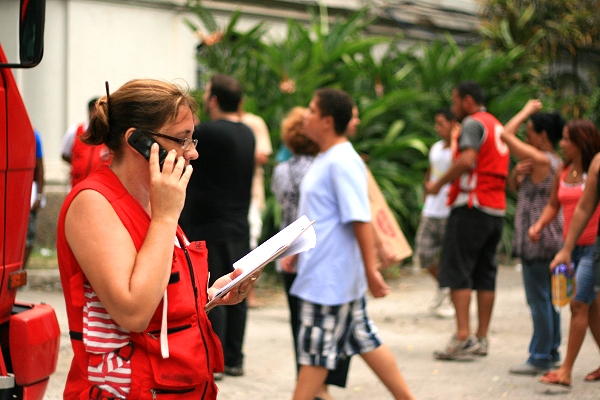 The IFRC’s science partners, the International Research Institute for Climate and Society (IRI), earlier this month issued a forecast of a “more active than normal” wildfire season in the western Amazon, where fires tend to peak during the dry months from July to September.

“In very dry seasons, we see more fire spread and intensity in the region,” said Katia Fernandes, an IRI research scientist specializing in the hydrometeorology and climate of the Amazon.

For the first time this year, forecasters have been able to gauge the fire season using a known relationship between water temperatures in the northern tropical Atlantic and fires in the Amazon.

El Niño increases water temperatures in this part of the ocean, pushing the band of rainfall near the equator called the Inter-Tropical Convergence Zone north and drying out the western Amazon.

A higher frequency of fires can result in more respiratory illness, as happened in 2010 – the last disastrous fire season in the western Amazon, when smoke affected nearly 500,000 people in Brazil and caused respiratory illness especially among children.

The strong 2015–16 El Niño has resulted in unusual wetness in south-east Brazil but very dry conditions in the drought-prone north and east, and now a heightened risk of fires in the west. (El Niño can have different impacts in parts of large countries that include different climatic zones.)

The Head of Programmes at the Brazilian Red Cross, Oscar Zuluaga, said the National Society was conscious of the increased wildfire danger, and its volunteer strength was high because of recent work on the Zika outbreak.

“We are liaising closely with our partners in civil defence to review contingency plans and increase preparedness for fires, floods and other risks,” he said.

Zuluaga added that Red Cross branches in Rondonia, Para and Amazonas, which faced the greatest fire danger, could muster 500 volunteers at short notice and mobilize several thousand more if needed.

He was speaking from a regional conference at the IFRC Americas zone office in Panama on climate and contingency planning for the hurricane season.

The 2010 wildfires also affected the Amazon region of Bolivia, triggering a national state of emergency there and affecting some 15,000 square kilometres.

Brazilian Red Cross personnel and civil defence officers conduct assessments after floods and landslides in Rio de Janeiro state caused by exceptionally heavy rain in January 2011, when an estimated 300 millimetres of rain fell in 24 hours. They are together reviewing contingency plans for wildfires and other risks over the next few months. (Library photo: Chiran Livera/IFRC)