Preparation and innovation key to reducing risk, and ‘a few days’ can decide life or death, 2016 Understanding Risk Forum hears 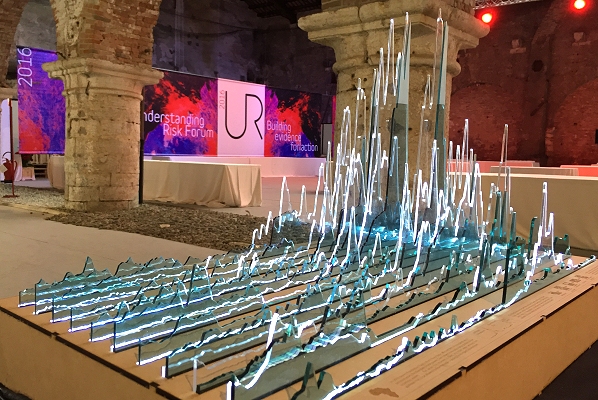 The head of the Italian Agency for Development Cooperation, Laura Frigenti, Friday told the closing session of the 2016 Understanding Risk Forum in Venice that “preparation and innovation” had emerged as the two key concepts in reducing risks related to natural disasters and climate change, when “a few days can make the difference between life and death”.

Ms Frigenti said natural disasters – in particular those related to climate change – were becoming more frequent “and their socio-economic impact is doubled if not tripled”.

No development effort, she added, would be sustainable unless good “risk-analysis tools” are part of the big picture.

More than 800 experts from all over the world gathered in Venice last week for the  fourth UR Forum (originally planned for Istanbul), whose theme was Building evidence for action.

‘Understanding Risk’ – a worldwide community of some 6,300 practitioners working on disaster risk – is an initiative of the Global Facility for Disaster Reduction and Recovery (GFDRR), part of the World Bank Group.

Ms Frigenti pointed out that Italy – itself exposed to multiple hazards – had been able to “transform weakness into strength”, developing a modern system of civil protection, including “advanced scientific and technological tools”; she also stressed “the crucial importance of innovative financial and insurance” instruments.

Participation at the UR Forum by the German Red Cross and the Climate Centre focused on evidence from forecast-based financing (FbF) pilots in Bangladesh, Ethiopia, Mozambique, Peru, Tanzania, Togo (see caption story) and Uganda.*

This included the recent assessment in Bangladesh as part of the setting up of operational FbF there, and another session on earth observations, open data and climate services.

IFRC Under Secretary General for Partnerships, Jemilah Mahmood, took part in a session on El Niño/La Niña led by the Climate Centre and the International Federation’s science partners, the IRI, and they later collaborated with USAID’s Office of Global Climate Change to discuss tools for improved decision-making on weather and climate.

Finally, the Climate Centre joined experts from the UK Met Office and the Netherlands-based Deltares institute to look at how to improve forecast information for decision-making, and contributed to the GFDRR-led session, Building a less risky future: How today’s decisions shape disaster risk in the cities of tomorrow.

In Venice Irene Amuron, Disaster Risk Reduction Manager of the Uganda Red Cross Society, who said she was taking home many ideas to enable the understanding of risk to remain at the centre of the National Society’s work, described the UR Forum as “an exhilarating blend of knowledge, experience and skills in a single space”.

Amuron oversaw the first humanitarian use of forecast-based financing by the Red Cross Red Crescent Movement in Uganda last November.

On the same day the UR Forum opened, a statement from the German Red Cross (GRC) said the background to forecast-based financing was “a sharp rise” in tropical cyclones, heatwaves and droughts.

In a press release for the World Humanitarian Summit that starts in Istanbul today, the GRC said it was cooperating with the German Federal Foreign Office – the donors now supporting FbF pilots in seven countries – in “combating the effects of climate-related natural disasters”.

The press release quoted Johannes Richert, GRC Deputy Secretary General, as saying: “There is now evidence that the investing in prevention is much more efficient than putting huge sums in emergency aid and reconstruction after a disaster.” Dr Richert is presenting FbF experience to date on at least two panels in Istanbul this week.

Go with the flow – A flood-risk data sculpture by Climate Centre Associate Director for Research and Innovation, Pablo Suarez, at the 2016 UR Forum, showing river flow between 2005 and 2015 at the Nangbeto Dam in Togo. It uses the data underpinning the FUNES (‘functional estimation’) tool that supports forecast-based financing in Togo and is “a blend of art and science”, said Dr Suarez, who also presented in Venice on techniques derived from “decision science, behavioural economics, neuroscience and art” aimed at improving the implementation of humanitarian and development work. (Photo: Janot Mendler de Suarez/Climate Centre)