What the world needs now: ‘preparedness and resilience’ (and forecast-based financing) 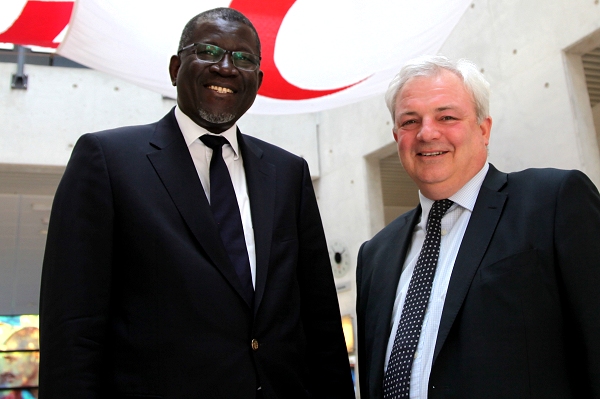 Two of the most influential figures in the sector yesterday called for a more “forward-looking humanitarian system that takes preparedness and resilience seriously and puts local response at the heart of these efforts”.

They added that the ‘forecast-based financing’ (FbF) model (currently supported by Germany) is the kind of new thinking that “changes the way we work”.

Stephen O’Brien, head of UN OCHA, and IFRC Secretary-General Elhadj As Sy – in a joint op-ed in the Huffington Post – write: “The premise is simple: investing in national and local skills, systems and knowledge to build resilience and preparedness will save lives, cut costs and preserve hard-won development gains.

“Yet no matter how forcefully we make this argument, the international community is still nearly always geared towards response.”

The two officials argue that the World Humanitarian Summit in Istanbul later this month provides an opportunity to “rewrite this narrative”, calling for three concrete changes:

*An expansion of the One Billion Coalition for Resilience, which they say “must be underpinned by a better understanding of crisis drivers”, as well as tools and mechanisms to prevent and mitigate them.

*A rethink of humanitarian financing so a “significant proportion” of funds would go to local actors, including National Societies.

*And the promotion of leadership by domestic authorities – even in large international relief operations like the 2015 earthquake in Nepal.

These steps could “bring about the change that is sorely needed”.

They cite evidence that “emergency preparedness and risk mitigation save lives”, including Bangladesh’s success in reducing the impact of cyclones, and research in Kenya and Ethiopia showing early preparedness for drought is “three times more cost-effective” than response.

But despite this, the “funds allocated to disaster risk reduction and emergency preparedness are inadequate”.

Mr O’Brien and Mr Sy say “data and risk analysis” are under-used in decision-making on preparedness, but add: “Forecast-based financing, an approach that uses science and climate knowledge to guide investment in preparedness, is increasingly used within the Red Cross and Red Crescent, in collaboration with key partners.

“This changes the way we work – across better anticipation and preparedness to early action.”

The Huffington Post op-ed focuses on Istanbul, but its themes of resilience and preparedness also relate closely to this week’s Adaptation Futures 2016 conference in Rotterdam, where Queen Maxima of the Netherlands said in an opening address that the financial sector was “a vital partner in helping individuals and communities…vulnerable to the impacts of climate change”.

FbF, which is supported by the German government and Red Cross with technical support from the Climate Centre, was detailed by the Red Cross Red Crescent at one of 155 ‘science-practice sessions’ at the conference – #confAF2016 – that is concluding Friday.

In the most recent use of FbF in the field, the Uganda Red Cross Society (URCS) last month carried out a humanitarian distribution for just over 2000 people in response to forecast flood-danger in the east of the country where seasonal rains are peaking.

It was the second use of forecast-based financing by the URCS as part of its own programme.

#confAF2016 delegates also heard from specialists of other FbF pilots carried out by the Red Cross Red Crescent in Bangladesh, Ethiopia, Mozambique and Peru.

At the Rotterdam event, agencies from the Netherlands Partners for Resilience (PfR) alliance also organized or partnered in special sessions on livelihoods and food security in the Sahel, and PfR’s ‘integrated risk management’ methodology.

“Development will not succeed if disasters continue to happen, and if they are even more frequent and severe due to climate change,” said Jane Madgwick, CEO of Wetlands International, a PfR member.

“Therefore the PfR combined their forces for integrated risk management. We need to understand disaster risks in the wider landscape of ecosystems and on the longer timescale of climate change.”

The IFRC also partnered in a session on the Zurich Flood Resilience Alliance.

#confAF2016 was organized by the Dutch government, the European Commission and the United Nations Environment Programme.

Stephen O’Brien and Elhadj As Sy together at the IFRC offices in Geneva last year. They argued yesterday that forecast-based financing is an example of new thinking that could “change the way we work” in the humanitarian sector. (Photo: Matthew Cochrane/IFRC)