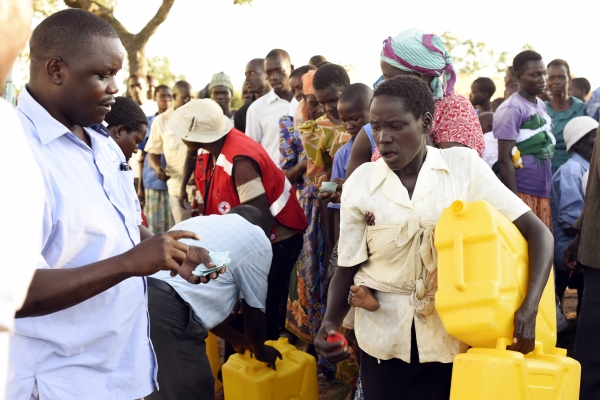 The Katakwi district branch of the Uganda Red Cross Society (URCS) Friday carried out another humanitarian distribution, for just over 2000 people, in response to forecast flood-danger in the east of the country where seasonal rains are peaking.

They are part of the URCS forecast-based financing (FbF) programme supported by the German government and Red Cross, with technical support from the Climate Centre.

The latest forecast, from the European Commission’s Global Flood Awareness System (GloFAS), backed up by the Uganda National Meteorological Authority (UNMA), said water levels would cross a specified threshold of hazard in May – the ‘trigger’ established as part of FbF.

Each of nearly 400 households in the villages of Akulonyo, Apedu, Omatai and Oroboai received water-purification tablets, two jerrycans, five storage-sacks and two bars of soap.

When the URCS received the trigger alert, it briefed the district authorities on the planned actions, and later partnered with doctors from WATESO, a Ugandan water NGO, who showed people how to use the purification tablets and identify early signs of malaria. (A malaria spike is a risk from floods locally.)

District Water Engineer, Phillip Opate, said he appreciated the Red Cross work in “having an early forecast that informed the community to get prepared in case of emergency”.

This was the second distribution of its kind in Uganda under the FbF programme and the third by the Red Cross Red Crescent Movement worldwide.

A similar distribution was carried out in eastern Uganda last November; in Peru in March, meanwhile, at least 1100 families living in areas vulnerable to heavy rains linked to El Niño received relief from the Peruvian Red Cross.

The UNMA, in its current seasonal climate outlook for the north-eastern region, said steady seasonal rains were “expected to get established” in mid-April, peaking in early to mid-May.

Satellite photos showed the November GloFAS forecast that triggered the first Ugandan distribution accurately predicted the floods, which occurred about a week after the humanitarian action by the Red Cross.

The URCS later issued a domestic appeal for US$ 2.8m (subsequently scaled down) for flood relief in a wider area around, but not including, the project villages; more than 26,000 people were then living in makeshift accommodation, according to local media reports.

The National Society has not requested other international assistance with its response to the floods.