CBA10: ‘Without involvement of the urban poor, no city will be resilient’ 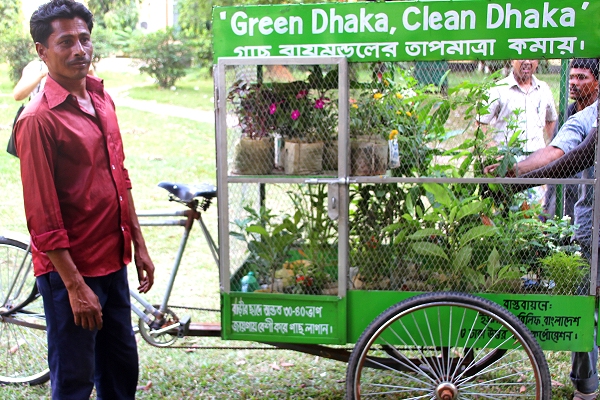 The tenth-anniversary Community-Based Adaptation Conference – ‘CBA10’ (proceedings) – ended yesterday on the Dhaka campus of the Independent University, Bangladesh, one of four co-organizers, with a call for the urban poor to be closely involved in building resilience.

Delegates from at least 40 countries discussed the overarching theme of enhancing resilience in urban communities, in what Anamul Haque, Technical Officer for Disaster Risk Reduction at the Bangladesh Red Crescent Society, described as “an amazing experience to listen to and learn from colleagues from different countries, and to hear what actions people are taking to adapt to climate change.”

“Without the involvement of the urban poor, no city will be resilient,” he added in a statement at Thursday’s closing session.

The Bangladesh government was represented at the inaugural session of CBA10 by Abdullah Al Islam Jakob, Deputy Minister of Environment and Forests, who said in an address that climate change is “the greatest challenge facing mankind”.

In a taped message, the former president of Ireland, Mary Robinson, said that in the aftermath of the Paris agreement on climate, and with the CBA conferences celebrating their tenth anniversary, “there is a great deal to celebrate.”

But the burden, she added, had “shifted more to developing countries, because they now have to implement the [intended nationally determined contributions]”, and they had to get the resources, support and technology they need to do that.

A general closing statement at the week-long conference emphasized the importance of urban adaptation and called for international climate finance to reach informal settlements directly.

It also stressed the importance of engaging vulnerable groups in the planning of infrastructure when addressing complex challenges in urban spaces and future integrated planning.

The other CBA10 organizers were the Bangladesh Centre for Advanced Studies and the Dhaka-based International Centre for Climate Change and Development.

The Climate Centre contributed a number of sessions to the programme, engaging participants in active reflection on the complex challenges of urban community-based adaptation.

Many large resilience programmes such as BRACED, Partners of Resilience and initiatives like Collaborative Adaptation Research Initiative in Africa and Asia and Future Climate for Africa are promoting better knowledge-management and learning.

A plenary session facilitated by the Climate Centre explored the reasons why people are often not effectively learning from failures, while highlighting strategies for alternative ways forward to improve the impact of adaptation interventions.

The Climate Centre also facilitated a session on climate information and decision-making in the urban context in collaboration with CARE International and the Stockholm Environment Institute.

This featured stories and experiences from Bangladesh, Kenya, Myanmar, India and Zambia, and explored ways of communicating complex information in a simple and effective way to support decision-making.

It became clear in discussions that climate information is highly relevant for the urban context, but data should be tailored to, and appropriate for, cities – an approach now being piloted in Southern Africa by the FRACTAL project.

To mark the conference’s anniversary, a Pot Gan (traditional Bangladeshi musical drama) performance was staged – The Lived Experience of Climate Change: The Story of One Piece of Land in Dhaka.

The 11th international community-based adaptation conference is in Uganda next June.

CBA10 started with three days of field trips to see how Dhaka communities are fighting back against vulnerability with projects like rooftop gardens. The huge city of 20m people is growing by nearly 5 per cent a year, in part as rural families flee river erosion and storm surges that contaminate their fields with salt water, and climate change impacts like rising sea-levels could double the city’s population in 15 years, the Thomson Reuters Foundation reported during CBA10. But Dhaka is also a thriving test bed for home-grown, climate-related solutions. (Photo: Sanne Hogesteeger/Climate Centre)