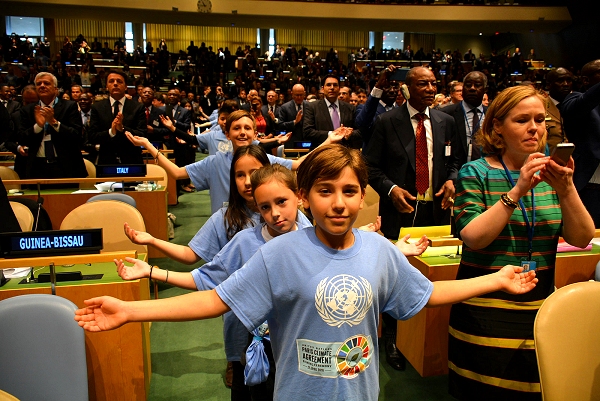 As world leaders convened in New York on Friday to sign the Paris Agreement on climate change, the key question on everyone’s mind was: How will this unprecedented global commitment translate into action on the ground?

A core ingredient for the success of the Paris Agreement was, in fact, that a big show of concrete action led the way for the world leaders – action not just by national governments or UN institutions, but by companies, civil society organisations, mayors and local government, youth groups, farmers – you name it.

With the Paris Agreement now on its way to full implementation, we should focus on taking those actions to scale.

Which brings me to the second key ingredient of the success of Paris: the vital balance between ambitious mitigation on the one hand, and support for the building of resilience on the other, especially for the world’s most vulnerable people.

The risk does still exist that this balance may be lost as we start to implement the Paris Agreement through the already-huge (and growing) concentration on the transition to renewable energy.

Paris sent a strong signal on this to markets and private investors, and the world is now adding more capacity for renewable power each year than coal, natural gas and oil combined.

Where is the equivalent commitment to resilience? It’s there in theory, with a very strong mandate, not just in the Paris Agreement but also across the new Sustainable Development Goals, as well as last year’s Sendai agreement on disaster risk reduction and next month’s World Humanitarian Summit in Istanbul.

But how are we really following up on those commitments?

Adaptation finance is increasing, albeit slowly. Investments in climate services are on the rise, and initiatives like the IFRC’s One Billion Coalition for Resilience, the UK-funded programme Building Resilience and Adaptation to Climate Extremes and Disasters, Partners for Resilience, the Global Resilience Partnership and others are aiming to link together work at different levels by various actors.

We are starting to address the root causes of rising risks and the lack of accountability for how we manage them, becoming gradually more reluctant to accept ‘natural disasters’ as natural events we could not have predicted.

But we are nowhere near balancing resilience with mitigation; we are simply not scaling up fast enough to keep up with the rising challenges.

The secret is not just channelling more global climate finance into adaptation, but also getting local information about risk and how to build resilience integrated into development and official planning across all sectors, and into the screening of major new investments.

We are seeing some exciting examples, but it’s now up to us to leverage Paris to take these to scale. We really don’t have a choice. Politically, failing to step up to both sides of the overall commitment — mitigation and resilience — would endanger the credibility of the entire global climate deal.

More importantly, it would also mean we’d fail to address the massive climate impacts already unfolding, with increasingly serious implications for our lives and economies in the coming years and decades, regardless of how much we reduce greenhouse gases.

So let’s make sure we take bold action to live up to the Paris ambitions – not just by transforming energy markets but also by building resilience, especially for the most vulnerable.

As Ban Ki-moon said at the signing ceremony for the Paris deal: “All hands on deck, from the local to the global.”

Children parade in the aisles of the General Assembly hall before the signing by 175 countries of the COP 21 climate agreement, which the UN says “far exceeded the historical record for first-day signatures of an international agreement”. (Photo: UN Photo via Flickr)