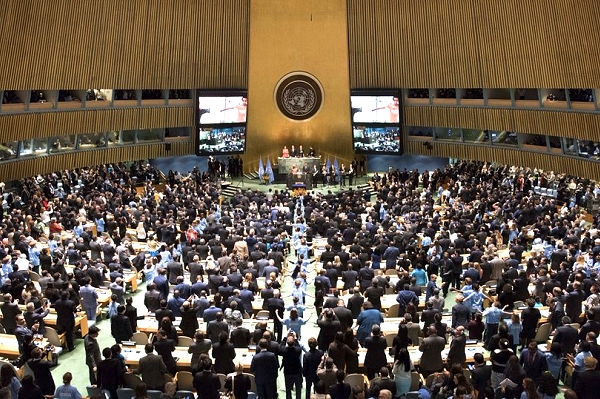 (This is a press release issued by the IFRC Friday shortly after the signing of the COP 21 global agreement on climate.)

News that 175 countries have signed the global agreement reached at the COP 21 climate talks in Paris has been hailed by the IFRC as “a breakthrough for vulnerable populations threatened by climate change”.

Garry Conille, IFRC Under Secretary General for Programmes and Operations, said: “The Paris Agreement has the right balance between mitigation and adaptation.

“This overwhelming show of support from states is a real breakthrough for vulnerable populations threatened by the impacts of climate change.

“This is a good beginning but the world has no time for complacency.

“The IFRC and its 190 member National Societies will work tirelessly with governments, civil society organizations, private sector and communities to ensure that this agreement is implemented in ways that not only respect the interests of vulnerable people, but also place their dignity and resilience at the heart of mitigation and adaptation policies and programmes.”

The agreement was signed Friday at a ceremony convened by UN Secretary-General Ban Ki-moon in New York.

Speaking in New York this week, Climate Centre Director Maarten van Aalst said there was “an important element of symbolism in the signing ceremony, but it has to grow into much more than just that.

“This is why the IFRC is pledging its own One Billion Coalition for Resilience to the Paris process, as well as embracing the UN Secretary-General’s ‘Anticipate, Absorb, Reshape’ initiative to build resilience, especially for those in vulnerable coastal areas or facing droughts and floods.”

The agreement now has to pass what the UN calls a “double threshold” to come into effect: the first is a requirement for at least 55 ratifications, acceptances or approvals after domestic political processes; the second is that these must come from states that represent at least 55 per cent of total greenhouse gas emissions.

The Paris agreement will remain open for signature for a full year after Friday's ceremony.

Once this double threshold has been achieved and states have deposited legal instruments with the UN, the agreement would enter into force 30 days from that point. It is possible this could happen over the coming year, well ahead of the original intended start date in 2020.

Children parade in the aisles of the General Assembly hall before the signing by 175 countries of the COP 21 climate agreement, which the UN says “far exceeded the historical record for first-day signatures of an international agreement”. Red Cross Red Crescent programmes like Partners for Resilience and BRACED are linking local solutions to aspirations embedded in the Paris agreement, while forecast-based financing is bridging the climate and humanitarian sectors in countries like Bangladesh, Peru and Uganda. (Photo: UN Photo/UNFCCC via Twitter)