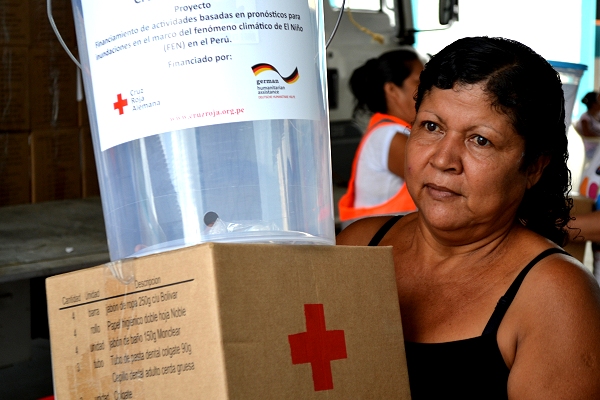 A humanitarian distribution under Forecast-based Financing (FbF) has now been carried out in the rain-swept north of Peru, in only the second exercise of its kind in the world by the Red Cross Red Crescent after a similar distribution in Uganda in November.

At least 1100 Peruvian families vulnerable to heavy rains linked to El Niño received non-food items (NFI) from the Peruvian Red Cross (PRC) last week, as part of the FbF programme supported by the German government and Red Cross with technical advice from the Climate Centre.

The operation was also reported in local media.

Seasonal forecasts at the end of 2015 and more recent short-term forecasts of heavy rain triggered NFI that included water purification, fumigation against disease-carrying mosquitoes, sanitation measures and hygiene kits to families in the communities of Laynas, Huaquilla, Serran (photo) and Pedregal.

The communities were selected as the most vulnerable after a joint assessment involving local and regional authorites and the Red Cross, but have not actually suffered flooding.

Olveis Pizarro, a Serran community member, said Red Cross training had enabled people to strengthen their own cooperation, while Berenilda Aguirre of Huaquilla said: “We are glad to have been trained to prepare for a disaster. Now we are a close-knit community, and much less concerned.”

The Red Cross is assisting a total of some 2,000 vulnerable families in the departments of Piura and Lambayeque as part of the FbF programme in the country.

Training and household awareness-raising measures were first triggered by relatively low-probability seasonal forecasts in November, while heavy rain and flash floods recently swept across more than half the country’s administrative regions.

An FbF workshop and field exercise on emergency shelter was held last week by the Red Cross branch in the Lambayeque capital, Chiclayo, and was joined by Santiago Luengo, emergency-shelter officer at the IFRC’s Pan-American Disaster Response Unit, who helped the Peruvian teams facilitate.

FbF links thresholds of probability – ‘triggers’ – with preparedness actions arrayed as standard operating procedures that include assignment of humanitarian responsibilities before an extreme event is forecast to occur; though in the end it may not.

The Peruvian Red Cross has now mapped out a comprehensive programme of FbF interventions that include early warning, first aid, health, water and sanitation, and shelter in flood-prone communities.

Forecast-based Financing is a bilateral programme of the German Red Cross in nine countries; Climate Centre specialists are providing technical support for the forecast triggers.

The concept was fully unveiled as a new approach for the humanitarian sector by the IFRC and the World Food Programme in a joint December statement.

In its original sense El Niño was named for the “warm-water current that periodically flows along the coast of Ecuador and Peru, disrupting the local fishery,” according to the Intergovernmental Panel on Climate Change glossary.

The possibility – increasing to near certainty – of a strong El Niño was first identified by Peruvian and international and meteorological institutions early last year.