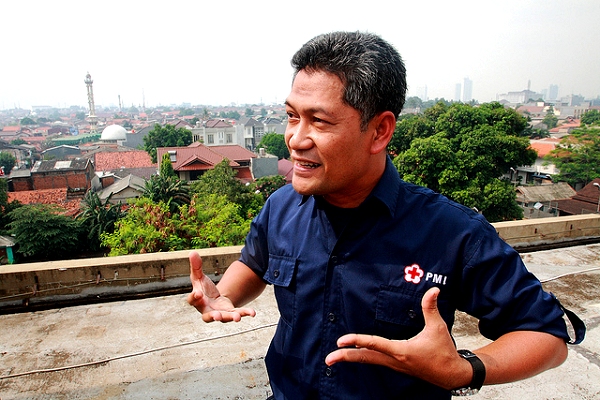 The Indonesian Red Cross – often known internationally by its Indonesian-language acronym PMI for Palang Merah Indonesia – is reviewing its plans for reinforcing community preparedness for damaging droughts in the light of possible scenarios for El Niño impacts recently outlined by the UN in Jakarta.

The United Nations Office for the Coordination of Humanitarian Affairs (OCHA) and ACAPS earlier this month jointly released a briefing, El Niño/La Niña Impacts on Indonesia: Scenarios, detailing possible climate impacts between now and the end of this year.

The current Pacific El Niño phenomenon, which has been linked to devastating extreme weather worldwide, has now passed its peak but its impacts may linger, forecasters said last month; it was not clear whether ‘neutral’ or La Niña conditions would then prevail.

“We are reviewing and redesigning our community-preparedness strategy for drought, especially dealing with this El Niño,” said Arifin Muhammad Hadi (photo), Head of the PMI’s Disaster Management Division, at the end of last week.

“We are fully aware that Indonesia as a country is regularly affected by drought, and early-warning information is very important to anticipate, respond, and build community resilience.

“That’s why when we get El Niño early warning from various sources, including the Climate Centre, we use this information for reviewing existing contingency plans and redesign scenarios – including the worst case for El Niño.”

Some fires had “burned uncontrolled throughout September and October, blanketing Indonesia in dangerous levels of smoke for several weeks and affecting palm oil and rubber production”.

Poor rainfall had reduced soil moisture at the start of planting for this year’s main harvest – particularly rice – and the result was delay.

“Localised reduced yields in 2015 and the delay in harvest of the current, first cycle due to El Niño has resulted in poorer households adopting negative coping-strategies [like] loans, selling of assets, etc., and being less able to withstand future shocks,” the report adds.

It details clusters of specific climatic and agronomic “triggers” that would be likely to cause a scenario to materialize.

The scenarios “are not attempts to predict the future,” the report says, “but a description of situations that could occur in the coming ten months, designed to highlight the possible impacts, and resulting humanitarian consequences, of El Niño and La Niña in 2016”.

They were intended to support planning, provide a framework for improved monitoring and surveillance, and create awareness and improve early warning.

The scenarios were developed during a two-day workshop in Jakarta involving 21 organizations including government and UN agencies, the National Meteorology Bureau, local and international NGOs, and the PMI and IFRC.

The Indonesian government is engaging in measures to mitigate drought such as improving irrigation channels, new reservoirs and wells, and distribution of water pumps, the UN says.

It has also allocated just over a quarter of a billion US dollars to improve state rice reserves and stabilize the price of staple foods.

Arifin Muhammad Hadi said he hoped that climate scientists would continue to share information like the OCHA-ACAPS report “and to provide technical support to affected countries”.

Arifin Muhammad Hadi, Head of the PMI’s Disaster Management Division, pictured here on the roof of the PMI Jakarta HQ, says the National Society – one of the most experienced in the world in preparedness – is reviewing its community-preparedness strategy for drought, centred on potential impacts of El Niño and La Niña. The PMI was also a key partner in the 2008–11 Netherlands Red Cross Society (NLRC) Pledge Project for climate-based risk reduction. (Library photo: Alex Wynter/NLRC)