Climate and Zika: an expert Q&A 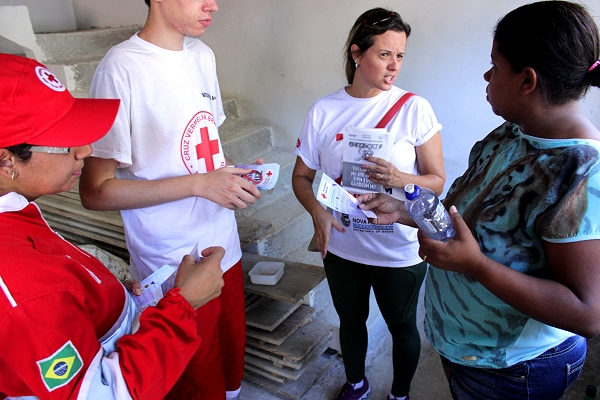 (This is an interview between the Wellcome Trust and Madeleine Thomson, Senior Research Scientist at IFRC science partners, the International Research Institute for Climate and Society. It was first published by the trust and IRI and has been edited slightly here for length. Thomson also directs the PAHO/WHO Collaborating Centre on Early Warning Systems for Malaria and other Climate Sensitive Diseases.)

Q How are Zika virus and the climate related?

We know that virtually all vector-borne diseases have a climate dimension. Temperature drives the rate at which vectors and pathogens develop, while rainfall often supports the creation of sites for the vectors to breed.

A lot of work has already been done on the relationship between dengue and climate, looking at rainfall and temperature and at how El Niño and La Niña have an impact.

The vectors for dengue are Aedes aegypti and Aedes albopictus mosquitoes. This is a starting point for Zika, as it shares the same vectors.

A. aegypti is an urban mosquito that breeds in containers where fresh water might collect, from flower vases to water drums to broken coconut shells. It is found only in tropical and subtropical regions.

A. albopictus has the potential for a slightly broader geographic range as its eggs can survive long periods in a dormant state.

Q How easy is it to predict what and where the next big epidemic will be?

The recent expansion of the A. aegypti and A. albopictus mosquitoes is very much associated with globalization – things like the movement of shipping containers around the world, air travel, population movement, forest clearing and urbanization.

We have to expect more of this type of emergence: new diseases that were historically isolated which can spread very rapidly and have a huge impact on a large community. Zika is not the last. There’ll be others, but predicting exactly what, where and when is really difficult.

Instead we need to prepare ourselves to be able to respond rapidly to a broad range of possible threats.

Q How can climate scientists help the world prepare better for future epidemics?

Climate scientists have to be interested in how their science can benefit society in a practical way. Then they have to really look at the timeframe of decisions.

Climate variability, which includes the impact of El Niño and La Niña, has a significant short-term impact on global temperatures and regional rainfall.

Longer-term trends in climate interact with this variability, meaning that, while likely changes in 50 or 100 years’ time are well understood for some regions, making predictions for the next 5 to 15 years is very difficult. And this is the timeframe often requested by decision-makers.

People are often asked questions around climate change, but if you are down in the weeds as a malaria, dengue or Zika control person, you are really largely dealing in the timeframe of climate variability.

What is happening now? What happened last year? What might happen next year in this particular locality?

However, policy-makers still need to be aware of what the longer-term trends might be.

Q What’s the one change you’d make in the world to make us better prepared for epidemics?

I would incorporate some fairly straightforward information on climate and environmental disease drivers in all epidemiological training.

Outbreak response people can work with partners in countries to get the best data, but if the health sector doesn’t understand the issues, particularly around climate variability and change, then it’s very hard for them to use the information effectively.