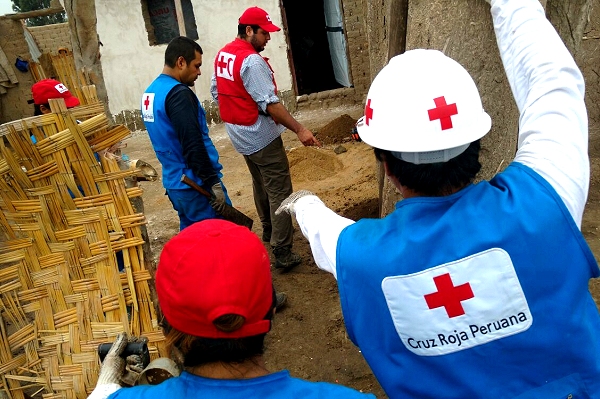 The Peruvian Red Cross is assisting 2,000 families as part of its German-supported ‘Forecast-based Financing’ (FbF) programme as heavy rain and flash floods blamed on El Niño sweep across more than half the country’s administrative regions.

Local press reports at the weekend said that in some areas the rains were comparable to 1997–8 peak when El Niño affected hundreds of thousands of people.

Red Cross FbF work is being piloted in vulnerable areas of northern Piura and Lambayeque regions.

Seasonal forecasts at the end of 2015 and short-term forecasts last month triggered humanitarian actions that included drinking water, fumigation against the mosquitoes that carry dengue fever, hygiene kits and drainage.

FbF links forecasts at varying levels of probability with preparedness actions agreed in advance with communities and arrayed as ‘standard operating procedures’ that include assignment of responsibilities before an extreme event strikes.

The Peruvian Red Cross has mapped out a comprehensive programme of FbF interventions that include early warning, first aid, health, water and sanitation, and shelter in flood-prone communities.

Until very recently it was poor rainfall in the south that was generating concern, about the potential impact on harvests.

In January Peru’s water authority announced it was activating a contingency fund for farmers in the departments of Arequipa, Moquegua, Tacna and Puno for use should a full-scale drought be declared.

Forecast-based Financing, supported by the German government, is a bilateral programme of the German Red Cross in nine countries; Climate Centre specialists are providing technical support for the forecast triggers.

The concept was fully unveiled as a new approach for the humanitarian sector by the IFRC and the World Food Programme in their joint statement in December.

El Niño itself was named for the “warm-water current that periodically flows along the coast of Ecuador and Peru, disrupting the local fishery,” according to the Intergovernmental Panel on Climate Change glossary.

The possibility – increasing to near certainty – of a destructive El Niño was first identified by Peruvian and international and meteorological institutions early last year.

The training workshop and field exercise on emergency shelter organized by the Peruvian Red Cross branch in the Lambayeque capital, Chiclayo on 24–26 February. The region is a centre of the German-supported ‘Forecast-based Financing’ programme in the country, currently focusing on El Niño impacts. (Photo: Peruvian Red Cross)