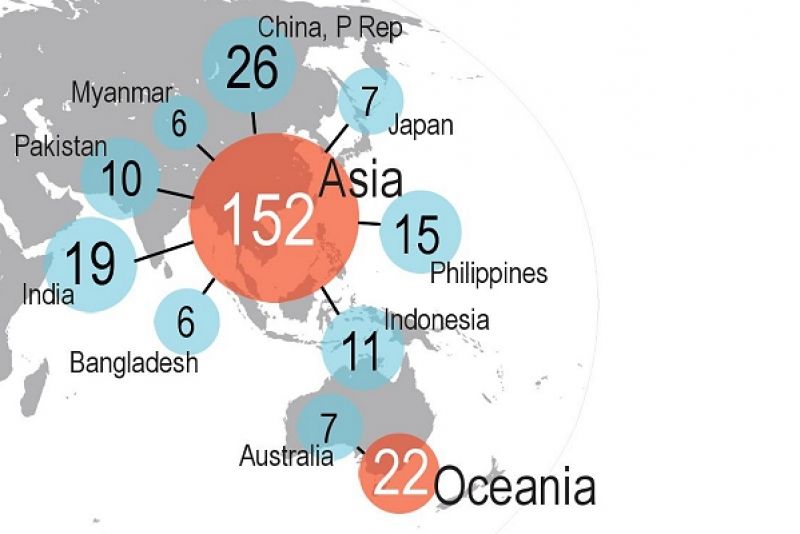 The head of the UN Office for Disaster Risk Reduction (UNISDR), Robert Glasser, said yesterday that just under 100 million people were affected by disasters last year, while climate often aided by a strong El Niño was a factor in most.

Introducing preliminary annual disaster data from the Brussels-based Centre for Research on the Epidemiology of Disasters (CRED), Mr Glasser said the most obvious impact of the hottest year on record “was the 32 major droughts recorded…more than double the ten-year annual average.”

He added: “The main message from this trends analysis is that reducing greenhouse gases and adapting to climate change is vital for countries seeking to reduce disaster risk now and in the future.”

Nepal confirmed that earthquakes are the single most deadly category of natural hazard and underlined the importance of building codes.

“It is buildings which kill people in seismic zones,” Mr Glasser said in a joint UNISDR-CRED press release, “as we saw again at the weekend in Taiwan.”

The five most disaster-hit countries in 2015 were – in descending order of frequency of events – China, the US, India, the Philippines and Indonesia.

Mr Glass added: “National disaster-management agencies in Asia are doing good work in reducing death tolls from storms through early warnings and timely evacuations, especially in the Philippines, China, Japan and the small island states of the Pacific.

“Asia and the Pacific bore the brunt of the 90 storms reported last year which included 48 cyclone-strength storms.”

CRED Director Debarati Guha-Sapir said: “At 22,773 deaths for 2015, overall disaster mortality was considerably down on the ten-year average of 76,424 deaths.

“It does seem that early warnings are having an impact in the case of storms. Further investment in this area is warranted…

“Extreme temperatures, mostly heatwaves, have been severe in 2015. Several countries in Europe faced heat stress with significant numbers of deaths particularly in France.

The 32 major droughts recorded by CRED last year compared to an annual average of 15 over the previous decade, its analysis says, and the 50.5 million people affected were well above a ten-year average of 35.4 million.

Floods, which usually affect the most people in any given year, were in second place in 2015, when 152 floods affected 27.5 million people and claimed 3,310 lives.

Among other weather or climate-related data from 2015 were landslides triggered by heavy rains that killed 1,369 people and wildfires that affected almost half a million people.

Number of reported disasters per country, in an extract from a CRED-UNISDR infographic of their preliminary analysis of disaster data for 2015: it shows Asia was the most disaster-affected region and China the most affected country. (Source: CRED-UNISDR)