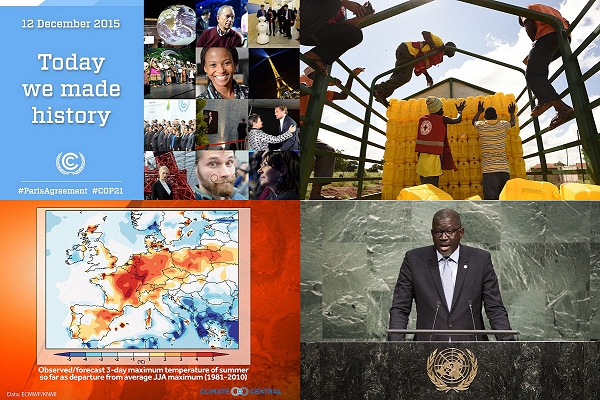 (This is the Climate Centre’s review of highlights of 2015 – a historic year of firsts for climate. More details on these and many other stories featuring the climate-related work of the Red Cross Red Crescent Movement can be found at our news archive.)

The start of the 45th World Economic Forum at Davos coincided with two events that, according to Climate Centre Director Maarten van Aalst, “we would be wise to view as warning shots from an increasingly volatile climate system.”

Seasonal rains in Southern Africa seemed to conspire, especially, against Malawi, with an economy heavily dependent on small-scale agriculture.

A second serious event came when Pacific waves generated by a “king tide” washed over the capital of the Marshall Islands, Majuro, leaving flooded homes and debris in their wake, but thankfully no deaths or injuries.

The year also began very much as it ended, at COP 21, with all eyes on the future and a glimpse of some high-tech options for humanitarian work at the second Red Cross Red Crescent global summit on emerging technologies at the Nyenrode Business University outside Amsterdam.

Among the technologies discussed were drones to relay mobile-phone signals to restore communications after disaster, wearable technology to help first-responders stay in touch, ATMs that double as biometric scanners to identify people who have lost their documents, and solar-powered fire sensors to protect informal urban settlements.

With scientists now able to determine the probability of extreme-weather events for specific regions up to about six months in advance, the German plan argued, operationalizing such information would improve humanitarian response and strengthen risk reduction.

The UN World Conference on Disaster Risk Reduction in Sendai, Japan, was overshadowed by Cyclone Pam – “a stark reminder that disaster risk management is a matter of life and death,” according to UNISDR, coordinating the event.

Vanuatu President Baldwin Lonsdale told delegates his country’s “hope for prospering into the future has been shattered”; the IFRC sent more than US$ 130,000 from its Disaster Relief Emergency Fund to enable the local Red Cross to respond.

In his official statement at the conference, IFRC President Tadateru Konoe presented the International Federation’s commitments to disaster risk reduction post-2015 and the new global goals heading for adoption in September.

“What we need today is a forward-looking plan to address the critical risks that compromise sustainable development, and enable communities to become stronger and more resilient,” he said.

He also announced “a rallying call” to join the IFRC’s One Billion Coalition for Resilience.

March also saw an early inkling of the threat the El Niño phenomenon would become as the year progressed when scientists at the US National Oceanic and Atmospheric Administration said the technical threshold for “long-anticipated” El Niño conditions has been crossed.

In a first for the Pacific, community-focused teams from ten Pacific island nations come together to experience the power of games in helping communities understand risk in a changing climate.

The two-day workshop held in Savusavu, on the south coast of Vanua Levu island, connected at least 35 participants from across the region.

An intensive writeshop in Nairobi, using methodology first developed by the International Institute of Rural Reconstruction, documented five years’ experience from Partners for Resilience (PfR) countries Ethiopia, Kenya and Uganda. The case studies were later being compiled into a book.

The American Red Cross – one of eight founding partners – and the Red Cross Red Crescent globally will leverage staff and resources already operating in initial focus countries of Bangladesh, Colombia and Ethiopia.

The Netherlands government became the second after Germany to publicly support forecast-based financing.

“In order to make most effective use of the available resources for preparedness, it is important to use knowledge on disaster risk,” said the Minister for Foreign Trade and Development Cooperation, Lilianne Ploumen, in a letter to Dutch MPs.

Other donor governments such as the US and the UK had also by this time shown interest in the programmes being developed by National Societies, with technical support from the German Red Cross and the Climate Centre.

The Climate Centre provided technical input at an IFRC workshop in Togo on climate and weather information in early warning, preparedness and response.

Staff from 12 French-speaking National Societies came together for the first climate-related IFRC-Climate Centre training workshop of its kind in West Africa.

Embodying the significance of the French capital for climate this year, the closing statement at a scientific conference at UNESCO headquarters in Paris described climate change as the “defining challenge” of the 21st century.

“Its effects have the potential to impact every region of the Earth, every ecosystem, and many aspects of the human endeavour,” it said.

A team of international scientists that includes the Climate Centre – the World Weather Attribution project – said it was “virtually certain” that climate change had increased the likelihood of the heatwave that affected Europe in the northern-hemisphere summer.

It was the first time information based on observations and models has been made available during a weather-related emergency.

Parts of Asia were “inundated by floodwaters and ravaged by landslides” as heavy rains battered the region, causing extensive damage to crops and property and displacing millions of people, the IFRC reported.

Myanmar was severely affected by the heavy downpours that began in mid-July; nearly 100 people there had by then lost their lives and about a million are affected.

The most recent IPCC assessment of climate impacts says: “All models and all scenarios project an increase in both the mean and extreme precipitation in the Indian summer monsoon.”

The IFRC also issued an information bulletin on the severe El Niño affecting Papua New Guinea, forecast to continue for months with reduced rainfall countrywide, saying the situation was expected to be the worst since the 1997–8 drought.

The IFRC strongly welcomed the adoption at a UN summit in New York of the 2030 Agenda for Sustainable Development, and pledged the support of its National Societies, 17 million volunteers worldwide, and secretariat in helping to deliver on them.

Secretary General Elhadj As Sy praised “the strong focus on resilience,” adding that the world was seeing “an increase in the intensity, frequency and unpredictability of disasters, often as a result of climate change and unplanned urbanization.”

Supported by the IFRC, the Vanuatu Red Cross Society (VRCS) continued to work with the government to respond to the needs of people battling against the impacts of El Niño.

Communities like Malampa, Shefa, Tafew, Matasu and Emae were all facing food and water shortages to varying degrees due to low rainfall and the lasting damage caused by Cyclone Pam.

(Later in the year, to prepare for the onset of a cyclone season potentially aggravated by El Niño, the Australian Red Cross and IFRC helped the VRCS to pre-position emergency relief goods in communities across the country.)

In the first full humanitarian use of forecast-based financing, the Uganda Red Cross distributed just under 5,000 preparedness items to flood-prone communities in Kapelebyong, 300 km north-east of the capital, Kampala.

The non-food items were procured with the support of the German government through the GRC.

Later, with the COP 21 UN climate talks underway in Paris, the World Food Programme and the IFRC, together with the GRC, formally unveiled the forecast-based humanitarian approach to the world in a joint statement issued simultaneously in Rome, Geneva and Paris.

Funds were also released through the WFP’s FoodSECuRE programme in areas Guatemala and Zimbabwe where drought risk is high due to El Niño.

“Our volunteers are standing on the front line and are witnessing how climate risks are disproportionately affecting the most vulnerable communities in the world.”

So said Garry Conille, IFRC Under-Secretary General for Programmes and Operations, after the adoption of the historic global climate agreement at COP 21 in Paris, and his words close our end-of-the-year review.

In 2014, 87 per cent of disasters were related to climate, IFRC data shows, and climate-related disasters are resulting in the displacement of tens of millions of people each year.

“This agreement will need to be implemented with a view to placing the interests of the most vulnerable at its core,” said Mr Conille.

Images clockwise from top left: History is made at COP 21 in Paris and again in Soroti, Uganda, with humanitarian forecast-based financing, used for the first time in 2015; IFRC Secretary General Elhadj As Sy addresses the UN summit in New York on sustainable development post-2015; an ECMWF/KNMI chart shows Europe’s summer heatwave.