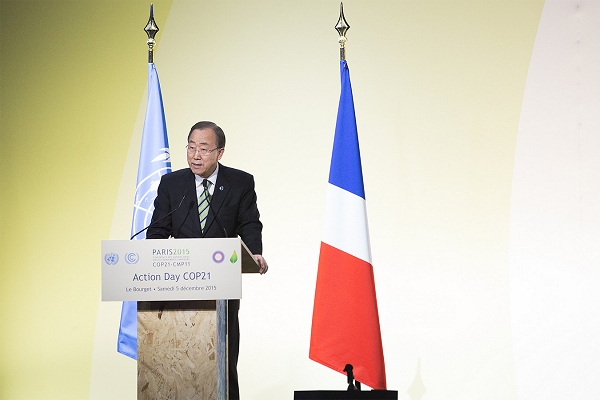 The United Nations Secretary-General Ban Ki-moon – summing up the first week of the COP 21 climate talks in Paris – yesterday said that “as never before, the stars are aligned in favour of strong, concerted action on climate change”.

The pace of international action on climate was quickening, the UN chief told an audience that included President Hollande of France.

“Governments, cities, the private sector, investors, and the public at large increasingly understand the grave risks posed by climate change,” he said.

Cities were reducing emissions and taking steps to bolter their resilience, while companies were investing in new technology and scaling up renewable energy.

“Last, and certainly not least,” Mr Ban said, “civil society is mobilizing as never before.”

On the question of resilience to climate impacts, he recalled that last year’s climate summit in New York had spawned “initiatives on forests, renewable energy, sustainable transport, resilience, finance” and other critical areas.

At COP 21, Wednesday was dubbed Resilience Day, when the UN, Peru and France announced new partnerships to mobilize finance to protect the people in the world most vulnerable to climate impacts.

They were part of the Lima to Paris Action Agenda (LPAA), launched last year at COP 20 in the Peruvian capital.

“When we talk about resilience, we are talking about how can we resist…and avoid negative consequences to our human population,” said Manuel Pulgar-Vidal, Peru’s environment minister; damage to “wildlife, to the habitat, to the ecosystems, to the water, to the ocean…

“If climate change is going to bring us natural disasters, we should have the objective of resilience as a way to face those kinds of consequences.”

Speaking on a COP high-level panel, IFRC Under Secretary-General Garry Conille committed the organization’s One Billion Coalition as a contribution to Ban Ki-moon’s resilience initiative; the Netherlands government also pledged the support of the Partners for Resilience alliance, led by Netherlands Red Cross, recognizing, it said, the importance of linking bottom-up risk analysis and capacity to policy and planning.

Among other announcements this week, a new Climate Risk Early Warning System was launched by France (with the GFDRR, UNISDR and WMO), while Australia, Canada, France, Germany, Luxembourg and the Netherlands agreed to give more than US$ 80 million jointly to it.

The World Food Programme together with the IFRC, and the German Red Cross, also unveiled their new forecast-based humanitarian approach under which funds are released for disaster preparedness and response before crises occur.

WFP’s Food Security Climate Resilience Facility “shifts the humanitarian model from a reactive system to one that looks forward and saves more lives, time and money,” according to a joint news release by the two organizations.

The Red Cross Red Crescent currently has seven pilot projects of the new approach around the world.

“Now, what is needed is a comprehensive strategy to fund the development and operationalization of forecast-based finance systems at the national and international level.”

Discussions at the 13th Development and Climate Days event, meanwhile, “centred on the need for bold and immediate action to tackle the challenges of climate impacts on the poor, and seize the opportunities presented by climate-compatible development,” according to a blog by Mairi Dupar of the Climate and Development Knowledge Network (CDKN).

“Participants heard that without transformative action to slash greenhouse gas emissions, hundreds of millions of people will fall into poverty in the coming decades,” she wrote.

D&C Days is also organized by the Climate Centre with IIED, ODI, and IDRC; it’s held every year in the middle weekend of the two-week-long UN climate talks, which are this year pivotal for the future of climate action.

At the COP talks themselves, at the end of an intense first week that most observers agreed generated optimism about the outcome, a new plenary negotiating group, “the Paris Committee”, was being chaired by the French Foreign Minister Laurent Fabius, and was set to meet daily.

There will also be a special review group that will include legal expertise to edit the final text.