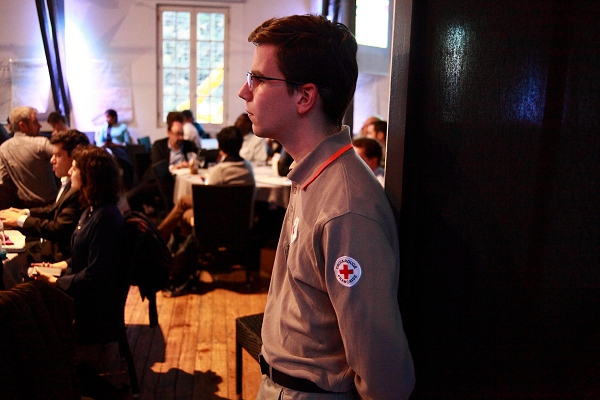 (This blog on the first day of Development and Climate Days in Paris also appears on the CDKN website. Some 200 people gathered in Paris this weekend for the 13th annual D&C Days, alongside annual UN climate talks, to debate how to achieve ‘zero poverty, zero emissions’. It has been edited here for length.)

Discussions at this practitioner-led event centred on the need for bold and immediate action to tackle the challenges of climate impacts on the poor, and to seize the opportunities presented by climate-compatible development.

Development and Climate Days is organized by the Climate Centre with IIED, ODI, CDKN and IDRC.

Participants heard that without transformative action to slash greenhouse gas emissions, hundreds of millions of people will fall into poverty in the coming decades.

Climate change could undermine the development progress of the past 20 years and jeopardise the achievement of the Sustainable Development Goals.

Ilmi Granoff presented an ODI analysis that shows unmitigated climate change could draw up to 720 million people back into extreme poverty between 2030 and 2050.

That’s as many as were drawn out of poverty in the last two decades of poverty eradication.

Stephane Hallegatte of the World Bank led a study that took a different approach, starting at household level and aggregating up – to national economies.

His team found that climate related shocks and stresses today are already a big hurdle to escaping poverty, even as households graduate out of poverty; climate shocks are responsible for pushing some of those households back into poverty – associated with drought, irrigation failure, crop disease and human health problems.

“We need a very strong communications strategy,” she said. “How can we use communications to move away from apocalyptic hopeless story into a positive one?

“We need to make the business case and the case for equity and fairness so countries can see this is about enlightened self interest.”

The event strapline was: Tough talk on poverty and climate change. Numerous speakers described how champions for climate action must persevere to manage the politics of change.

Simon Maxwell introduced the ‘tough talk’ part by reminding us that climate action should be mainstreamed in development, but it cannot be achieved without trade-offs and difficult conversations.

Governments need to be ready to deal explicitly with those who will lose out from climate-compatible development policies. For example, if you were a minister, what would you say to the coal miner who would lose his job as a result of restructuring towards a low-carbon economy?

Leaders need plans to support disadvantaged groups in the transition to green economies.

Climate change is locked in between now and 2030 as a result of historic emissions and inertia in the Earth’s systems.

Simon Anderson and his colleagues from IIED made the case for taking radical approaches to adaptation now, to deal with the impacts of these and any future changes.

If households and communities take only baby steps toward adaptation, they could find themselves overwhelmed by possible deeper climate impacts over the horizon, he said.

People in extreme poverty have the most to lose from climate impacts and investing in far-reaching, far-sighted measures to protect the extreme poor are justified, he argued.

Nanki Kaur of IIED said that climate change impacts and the lack of social protection are the greatest drivers of poverty in the period of the Sustainable Development Goals.

The way forward is to integrate climate adaptation actions and social protection systems. Stephane Hallegatte echoed these themes: his Shock Waves study found that “Rapid, inclusive and climate-informed development can prevent most consequences of climate change on poverty until 2030”.

What does good development look like? It includes measures that help the poor to save money, and stronger social-protection systems, including progress toward universal healthcare systems.

There are no magic bullets though: “It’s a slew of policies, not any one measure.”

On the climate mitigation front, speakers also urged immediate and radical action. Ilmi Granoff called for “all countries to transform their economies toward zero net emissions and all countries need to peak in next one to two decades”, with the onus on the wealthiest countries to “dramatically ratchet down current emissions.”

In the energy sector, Hilton Trollip of the University of Cape Town’s Energy Research Centre said: “If you make incremental changes in the energy system, you go down a dead end [road] – we have modelled it over and over – you end up with stranded assets and catastrophic climate change.

“If we start building differently now, in 35 years we will have a very different energy system.”

For mitigation actions as a whole, Fatima Denton’s optimism was borne out by the economic analysis. “Looking at the mitigation opportunities there are significant ‘negative cost opportunities’,” Granoff said.

Fabien Jaffre, 20, a volunteer with the French Red Cross, who was among the team attending D&C Days in Paris this weekend. A new pledge on climate which the FRC is inviting sister National Societies to sign “promotes their very special status to efficiently contribute to public awareness on climate, and reminds governments of the urgent need to integrate disaster risk reduction into adaptation plans and resource mobilization,” said Antoine Peigney, Director International Relations and Operations.
(Photo: Alex Wynter/Climate Centre)