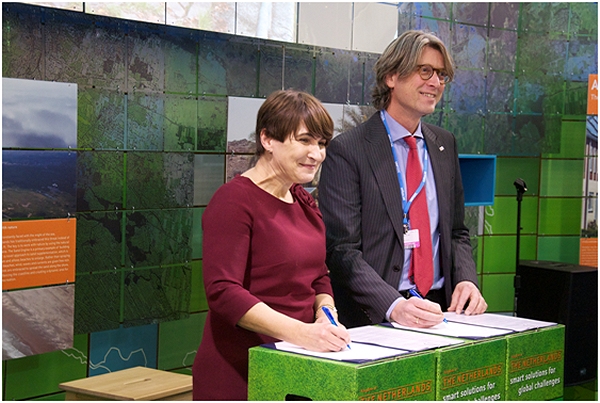 (This is a joint press release issued simultaneously this morning in the Netherlands and at COP 21 in Paris by the five PfR agencies.)

In a 30 November speech, the Netherlands Prime Minister Mark Rutte said the agreement with the Netherlands Red Cross, the Red Cross Red Crescent Climate Centre, Wetlands International, Cordaid and CARE Netherlands “contributes to strengthening the resilience and livelihoods of many vulnerable communities, connects this to government priorities and investments, and supports economic growth that is inclusive and sustainable.

“This is very much in line with the priorities of the Dutch government.”

The programme is the Dutch contribution to UN Secretary General Ban Ki Moon’s ‘A2R’ initiative for accelerated resilience and climate adaptation; it was announced today, Resilience Day, at the COP 21 UN climate talks in Paris.

The five Dutch agencies already work together in the ‘Partners for Resilience’ (PfR) alliance to help communities build resilience to natural hazards often aggravated by climate change and environmental degradation.

They focus on the role of ecosystems in disaster risk reduction and the wider landscape, including river basins, as well as managing changing extremes and rising uncertainties in a changing climate.

An essential element of the partnership is bringing information about local risks and solutions into planning processes and investment decisions at the national, regional and international level.

“For example, there is a need to ensure that large water and coastal-zone management schemes, including infrastructure, become more ‘risk-informed’, adhere to environmental requirements, and consider the needs of all stakeholders, including communities downstream,” said Climate Centre Director Maarten van Aalst, who is in Paris.

“But equally, it’s also about enhancing early warning systems, making the best use of climate information across timescales, and ensuring that such warnings are followed by early action on the ground, rather than waiting for disasters to happen.”

As regional policies often impact on risk reduction at the national level, the programme also includes work at the regional level in the Horn of Africa, West Africa (Niger Basin), Central America, and South and South-East Asia.

In the past five years, PfR has already collaborated with some 60 local civil society organizations to strengthen the disaster resilience of over half a million vulnerable people with in-depth assessments, risk reduction measures, and livelihoods support.

The new partnership will build the capacity of civil society in its focus countries to influence policy-making, investments and practice on integrated risk management at the local, national, regional and global level.

Partners for Resilience will help local groups engage with the development and implementation of policies, legislative frameworks, investment and funding, inclusive processes and linking up with practice at community level.

The signing of the new Netherlands partnership agreement at COP 21 in Paris. Ploumen at left; at right is Juriaan Lahr, Head of International Assistance at the Netherlands Red Cross. (Photo: Raimond Duijsens/NLRC)