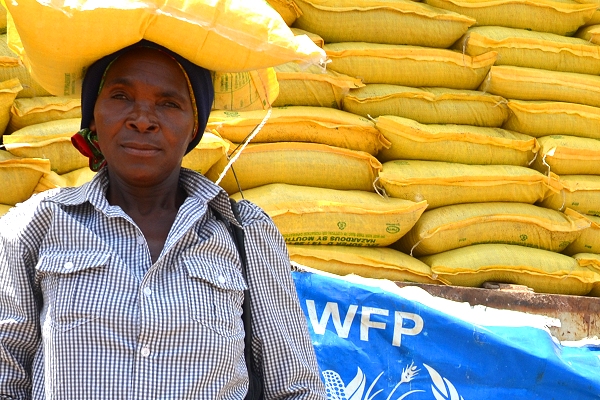 (This story is a joint statement by the IFRC and the World Food Programme, issued simultaneously as a press release in Rome, Geneva and at the COP 21 meeting in Paris.)

As the world negotiates a new climate deal, the United Nations World Food Programme (WFP) and the IFRC, together with German Red Cross (GRC), have unveiled a forecast-based approach which would transform the humanitarian system.

The new approach will release funds for disaster preparedness and response before the crisis occurs while providing the necessary funds for resilience building activities.

WFP’s Food Security Climate Resilience Facility (FoodSECuRE) will shift the humanitarian model from a reactive system to one that looks forward and saves more lives, time and money.

Both FoodSECuRE and a Red Cross project in Uganda – among a range of Red Cross-Red Crescent forecast-based financing pilot projects – have been activated in recent weeks to meet climate-related disasters, the dramatic predictions of El Niño and extreme weather.

A 2015 FoodSECuRE analysis in Sudan and Niger shows that using a forecast-based system would lower the cost of the humanitarian response by 50 per cent.

FoodSECuRE unlocks funds before disasters, but also ensures that funds are available between cycles of disasters, because only through reliable, multi-year funding will vulnerable people build their resilience to the effects of climate change.

“Now we have the tools to respond before a disaster hits and between recurrent disasters – it’s the only way to help lift vulnerable people out of a cycle of chronic hunger and poverty, for good.

“Turning the FoodSECuRE tool into a meaningful global facility will require mobilizing US$ 400 million.”

In Guatemala and Zimbabwe, funds have been released through FoodSECuRE in areas where drought risk is high due to El Niño.

Farmers have been trained to grow drought-resistant crops and to change their agricultural practices to conserve both soil and water, so that even if the harvest is bad, people will still have food on the table.

The Red Cross Red Crescent has seven operational pilot projects of this new approach around the world.

“Now, what is needed is a comprehensive strategy to fund the development and operationalization of forecast-based finance systems at the national and international level.”

In Uganda, money was released from a GRC preparedness fund to allow the Uganda Red Cross to distribute items based on a flood forecast.

With a few days’ anticipation of rising water levels, Red Cross volunteers distributed water purification tablets and flood protection items to hundreds of vulnerable families – part of a project funded by the German Federal Ministry for Economic Cooperation and Development.

“Because of this El Niño that is battering this country, the Ugandan Government and the Uganda Red Cross were able to do some pre-emptive interventions in Uganda,” said Minister Musa Ecweru of Uganda at the recent Understanding Risk and Finance conference in Addis Ababa.

“This is a real departure from our tradition of waiting until it arrives and then we act.”

The German Federal Foreign Office’s Action Plan on Climate, coordinated by the GRC, meanwhile, centres on forecast-based financing pilots by WFP or National Societies in Bangladesh, the Dominican Republic, Haiti, Mozambique, Nepal, Peru and the Philippines.

Farai Maringi collecting fertiliser for her crop as part of the resilience programme in Mwenezi, Zimbabwe. Funds were released through the FoodSeCURE initiative based on El Niño-related drought forecasts. (Photo: Tatenda Macheka/WFP)