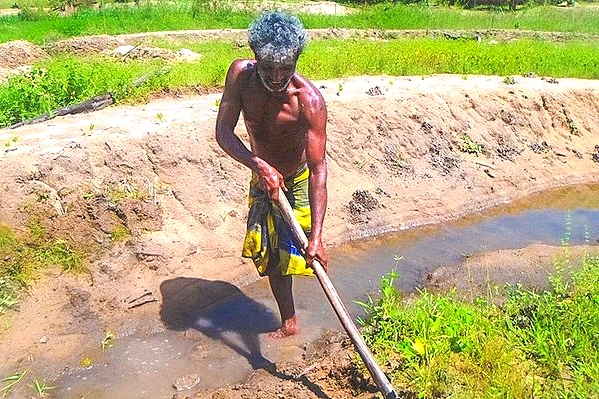 (This story appeared first earlier this week on the IFRC news site. It has been edited here for length.)

In recent years Sri Lanka has endured a series of extreme weather-related events, attributed in part to climate change. Since 2010, torrential rains have caused five major floods and the country has also been beset by four periods of significant drought.

One of the consequences has been economic hardship borne by farmers like David Singgho who comes from the small village of Nagastenne in the district of Polonnaruwa.

“It doesn’t rain as much as it used to,” said the father of two. “Back in the old days, we had two seasons of rain for cultivation, but now the rain patterns are unreliable.

“Sometimes you can go for months without a single drop.”

Like many farmers in Sri Lanka’s dry zone, Singgho has to work hard to keep his family out of poverty – a task made even more challenging after he lost a leg in an accident.

The effects of the current El Niño have certainly not helped Sri Lanka’s farmers.

The country’s dry zone in the eastern, central and northern provinces have been hit by drought and for the past two months, and over 150,000 people in the worst-affected areas have been reliant upon deliveries by water tankers provided by local authorities.

Helping poor farmers adapt to such climate uncertainty has been a priority for the Red Cross.

He recently became part of the project Combating Adverse Impacts Of Climate Change Through Sustainable Agricultural Practices, initiated by the Sri Lanka Red Cross Society and implemented in Nagastenne village.

The project derives technical guidance from the Natural Resource Management Centre of the Department of Agriculture in Peradeniya, Kandy, and is implemented in partnership with the United Nations Development Programme, with funding support from the Global Environmental Facility.

Now Singgho has learned to use sustainable agricultural practices which include digging small holes in barren, degraded land and filling them with organic matter, adding nutrients to the soil where he sows.

He also constructs “contour bunds” on his farmland to slow water run-off, prevent erosion, and assist in recharging groundwater.

These water-harvesting techniques have allowed over 100 families in Nagastenna to restore completely degraded land to much higher levels of production.

“Watering crops on this harsh landscape is no easy task, especially with my condition,” he says.

“Having access to this modern type of farming eases my burden and also helps me to cultivate better crops.”