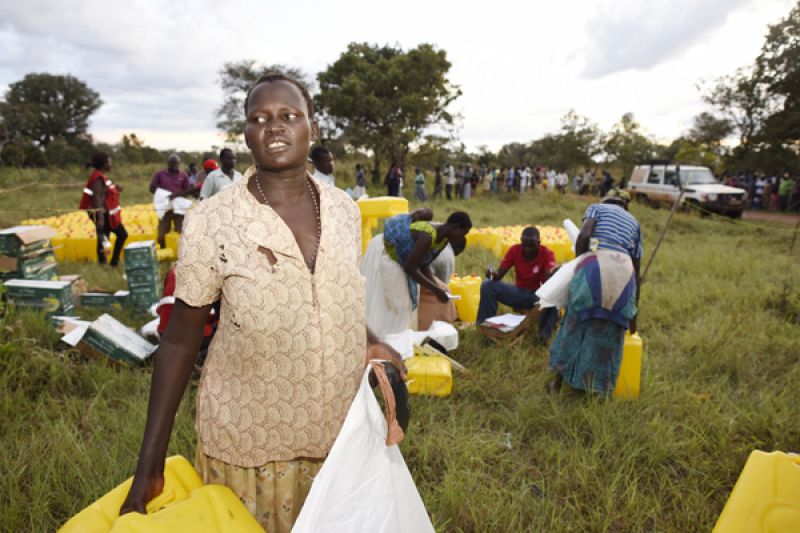 In a ground-breaking humanitarian action triggered by a scientific forecast of flood risk, the Uganda Red Cross Society (URCS) Friday distributed just under 5,000 preparedness items to flood-prone communities in Kapelebyong sub-county, some 300 km north-east of the capital, Kampala.

The action was based on a forecast of rising water-levels in the Teso area – especially in Amemia parish.

The non-food items (NFI) were procured under ‘forecast-based financing’ with the support of the German government through the German Red Cross, who have established a special mini-site.

The URC mobilized the supplies as soon as a predetermined threshold of forecast risk was crossed on Thursday.

It was the first full humanitarian use of forecast-based financing, which had only been piloted.

“One of the disaster effects we were targeting is waterborne disease,” said Irene Amuron, URCS Disaster Risk Reduction Manager, who led the operation.

Local Acting Chief Administration Officer Paul Edotu had indicated that dysentery existed in the area, and the authorities were anxious to prevent it.

“The teams distributed two jerrycans, two bars of soap, and a month’s supply of water purification tablets to 370 households in the villages of Okoboi, Omatai, Apedu and Akulonyo,” Amuron added.

After receiving his distribution card, Local Council II Chairman, Francis Olum, explained that people had been preparing for possible effects of El Niño, according to a URCS press release.

“In 2007, we were taken unawares by the flooding,” he said, “but this time we are happy the Red Cross is coming in earlier.”

The Red Cross trucked the NFI from a warehouse in Kampala; they arrived at the URCS Soroti branch office on Friday and were distributed the same morning to the Kapelebyong communities.

The URCS will continue to support residents to prepare for possibly worsening rainfall, although the forecast indicated risk above a particular level – not certainty of disaster.

“By using forecasts in this innovative project, we are now intervening even earlier, before receiving reports of disasters.

“With such a timely disbursal, we hope to avoid potential catastrophe before it even happens, supporting people to continue working and going to school.”

The forecast used in Uganda was based on the European Commission’s Global Flood Awareness System and verified with the Uganda National Meteorological Agency, the Uganda Hydrological Department, and the European Centre for Medium Range Weather Forecasts.

The Climate Centre’s Senior Climate Specialist Erin Coughlan, who was in Kapelebyong for the distribution, said: “The Red Cross will now gather evidence from this experience, and document how preparing for disaster effects has supported communities through the rainy season.

“The evidence from Uganda will inform development of pilots in 15 countries around the world that aim to replicate the approach.”

Lessons from Kapelebyong will be presented at the second dialogue platform on forecast-based financing in Geneva, ahead of the World Humanitarian Summit in 2016.

“In a small but highly significant way, humanitarian history was made in Soroti this week,” said Climate Centre Director Maarten van Aalst.

“Forecast-based financing has been extensively researched and drilled in several countries, including Uganda, but never deployed for real. This is a first.

“Wider application will still take a lot of effort – as well as continued engagement by donors, National Societies and science partners – but this was a great day and a very important breakthrough.”

A resident of rain-swept Kapelebyong sub-county gets humanitarian supplies in the first for-real distribution under forecast-based financing at the end of last week. Experience from Uganda will help guide development of pilots in 15 countries around the world aiming to replicate the ground-breaking approach to early warning, early action. (Photo: Denis Onyodi/Climate Centre)