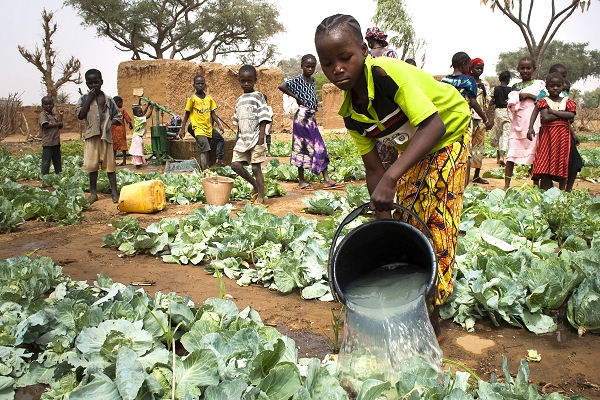 (This story appeared first as a press release by the World Bank yesterday.)

Climate change is already preventing people from escaping poverty, and without rapid, inclusive and climate-smart development, together with emissions reductions efforts that protect the poor, there could be more than 100 million additional people in poverty by 2030, according to a new World Bank Group report released before the international climate conference in Paris.

The report, Shock Waves: Managing the Impacts of Climate Change on Poverty, finds that poor people are already at high risk from climate-related shocks, including crop failures from reduced rainfall, spikes in food prices after extreme weather events, and increased incidence of diseases after heat waves and floods.

It says such shocks could wipe out hard-won gains, leading to irreversible losses, driving people back into poverty, particularly in Africa and South Asia.

“This report sends a clear message that ending poverty will not be possible unless we take strong action to reduce the threat of climate change on poor people and dramatically reduce harmful emissions,” said World Bank Group President Jim Yong Kim.

“Climate change hits the poorest the hardest, and our challenge now is to protect tens of millions of people from falling into extreme poverty because of a changing climate.”

The report finds that the poorest people are more exposed than the average population to climate-related shocks such as floods, droughts, and heat waves, and they lose much more of their wealth when they are hit.

Poor people are also more exposed to higher temperatures and live in countries where food production is expected to decrease because of climate change.

The report, released a month before negotiators gather in Paris for international climate talks, shows how ending poverty and fighting climate change can be more effectively achieved if addressed together.

Agriculture will be the main driver of any increase in poverty, the report finds. Modelling studies suggest that climate change could result in global crop yield losses as large as 5 percent by 2030 and 30 percent by 2080.

Health effects – higher incidence of malaria, diarrhoea and stunting – and the labour productivity effects of high temperatures are the next-strongest drivers.

The impact of climate change on food prices in Africa could be as high as 12 per cent in 2030 and 70 per cent by 2080 – a crippling blow to those nations where food consumption of the poorest households amounts to over 60 per cent of total spending.

In focusing on impacts through agriculture, natural disasters and health, the report calls for development efforts that improve the resilience of poor people, such as strengthening social safety nets and universal health coverage, along with climate-specific measures to help cope with a changing climate, such as upgraded flood defences, early warning systems and climate-resistant crops.

At the same time, the report says an all-out push to reduce greenhouse gas emissions is needed to remove the long-term threat that climate change poses for poverty reduction.

Such mitigation efforts should be designed to ensure that they do not burden the poor. For example, the savings from eliminating fossil fuel subsidies could be reinvested in assistance schemes to help poor families cope with higher fuel costs.

In poor countries, support from the international community will be essential to accomplish many of these measures, according to the report.

This is particularly true for investments with high upfront costs – such as urban transport or resilient energy infrastructure – that are critical to prevent lock-ins into carbon-intensive patterns.

“The future is not set in stone,” said Stephane Hallegatte, a senior economist at the World Bank who led the team that prepared the report. “We have a window of opportunity to achieve our poverty objectives in the face of climate change, provided we make wise policy choices now.”

The report also reviews successful policy solutions to show that good development can protect the poor from shocks.

For example, after Typhoon Yolanda, the Philippines was able to use the existing conditional cash-transfer system to quickly distribute emergency funding to the affected population.

In Uganda, the combination of new crop varieties and extension visits has boosted household agricultural income by 16 per cent.

Niger Red Cross experts taught people in the village of Zakire Zarma the best way to grow vegetables in the conditions they face in a 2012 UK-supported project, also providing seeds and tools and helping with the construction of wells. Climate impacts on agriculture could be the main driver of increased poverty in Africa and South Asia, “unless we take strong action to reduce the threat of climate change,” according to a new World Bank report. (Library photo: Mari Aftret Mortvedt/Norwegian Red Cross.)