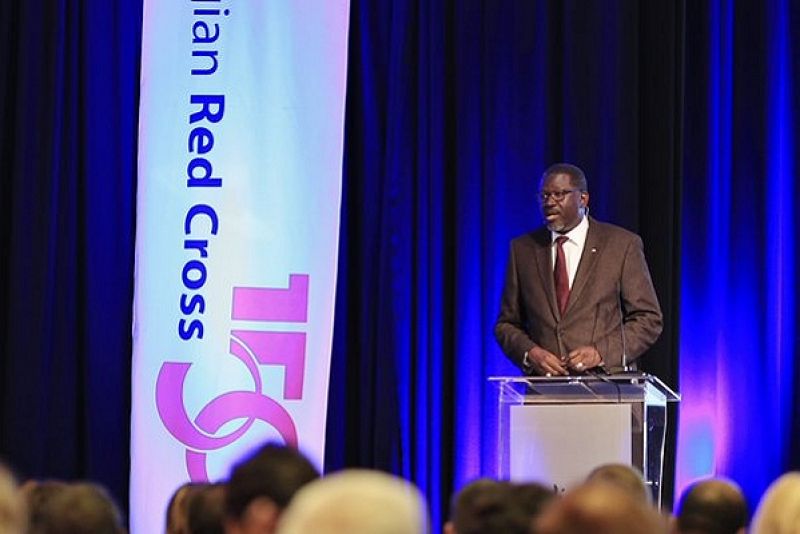 We are increasingly seeing debates about the best use of aid money. Some argue that, in the context of growing humanitarian needs, resources should go towards addressing the most pressing and urgent suffering. Others argue that resources are better spent on longer-term solutions.

Humanitarian and development needs are part of the same continuum of experience. We should be able to bridge this by seeking lasting impact across all our interventions before, during, and after a crisis — by supporting resilience.

From buzzword to reality

Resilience is not a programme. It is a way of reimagining humanitarian assistance; of rethinking what we do and why we do it.

For the Red Cross and Red Crescent, it captures the totality of all that we are trying to achieve across all programme areas, to enable communities to become stronger and safer.

Our work leads us to respond to the needs of vulnerable people across the world — be it in Syria, Nepal, the Sahel, Greece, or for that matter in Norway — before, during and after crises.

But reducing risks and vulnerabilities is a process that must be owned, led and carried out by people themselves, to bring about lasting change in their communities.

Today, the International Red Cross and Red Crescent Movement, the UN, European Union, non-governmental organizations, universities, research institutions and the private sector are meeting in Oslo to best determine how we can move the concept of resilience from buzzword to reality, creating the necessary bridges between humanitarian aid and development assistance.

The Community Resilience Conference comes at an opportune time. Humanitarian needs today far exceed available resources, and it comes in the lead up to next year’s World Humanitarian Summit in Istanbul where the future of humanitarian action will be discussed. It also comes on the heels of the international community’s adoption of the 2030 development agenda, which includes 17 goals for sustainable development.

Building community resilience cuts across these global agendas, and asks us to think differently about the work we do.

Very often, humanitarian organizations use magnitude as an indicator of achievement. We talk about the number of people we reach as evidence of our impact.

But if we are focused on reducing risk and building resilience, then success should instead be measured by a decrease in the number of people that we are reaching year on year.

If our work with communities is designed to make them stronger and better able to withstand the shocks they face, then we should expect their demand for our services to steadily decline.

Hence our One Billion Coalition for Resilience — the Red Cross and Red Crescent commitment to help at least 1 billion people over the next decade to reduce the risks that affect their lives and their vulnerability in the face of adversity.

The Norwegian Red Cross is proud to be part of this global initiative.

Reaching 1 billion people will require a change in mindset and a process of building partnerships and empowering collaboration at all levels — from local to global — through a dynamic approach in which partners will further accept to share risks, resources, capabilities and accountability.

Evidence also shows that investing in resilience, including disaster preparedness, not only saves lives but also saves money for governments in the longer term.

Building resilience will require more investment at the local level: Local and national actors who are on the spot before, during and after a crisis are the first to respond to disasters.

They are also best placed to understand the needs and vulnerabilities of the communities they belong to. They speak the same languages, understand the culture, and know the resources that are available. They are trusted, and are often the only ones with wide access to people in need, as is the case with Red Crescent volunteers in Syria.

If we are to make resilience real, then we need to realign the global humanitarian system, and strike a better balance between local and international actors.

Local actors need to be more involved in decision-making and coordination. They also need more direct access to funding, including from international sources.

International assistance must be brought with a sense of humility, and commitment to complement and strengthen local capacity.

Most importantly, these partnerships between local and international actors need to be entered into over a sustained period. They should already be in place when a crisis hits and should survive long after recovery efforts have finished.

As the world’s largest humanitarian network — with some 17 million volunteers in 189 countries — the IFRC is committed to resilience as a ‘whole of society’ approach based on equal, inclusive and broad partnerships.

Looking ahead, we know that humanitarian needs will continue to grow, driven by conflicts as well as factors such as climate change, population growth, urbanization and unequal and inadequate access to food, water and energy.

We know these needs will outstrip our capacity to respond. So we need a new approach, one that focuses, at all stages, on leaving people stronger, safer and better able to withstand future shocks, and thrive in their aftermath.

Sven Mollekleiv is the senior vice-president and head of corporate relations and corporate social responsibility in DNVGL. He is also the ombudsman in the DNVGL. He started in DNV as the HR director and member of executive board in 2001. He has previously been the secretary general of the Norwegian Red Cross, a position he held for 10 years. He was elected president of the Norwegian Red Cross in 2008.

Elhadj As Sy (photo) is the secretary general of the International Federation of Red Cross and Red Crescent Societies. He has extensive experience in leadership roles in the humanitarian sector, having previously served at a senior level with UNICEF, UNAIDS, the Global Fund to Fight AIDS, Tuberculosis and Malaria, and other agencies for more than 25 years.