Climate negotiators gear up for war of words at Bonn talks 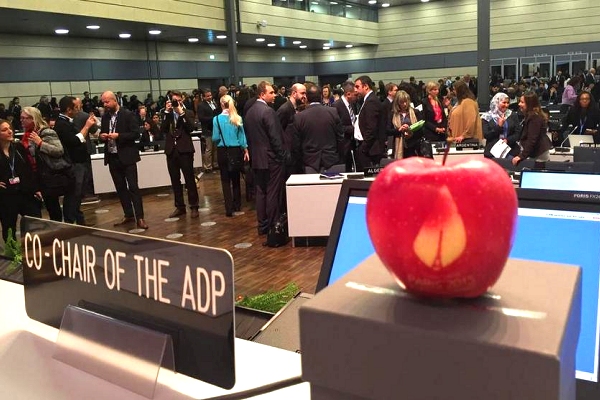 “It does not inspire,” Prakash Javadekar, India’s minister for environment, forests and climate change, said cuttingly of the chopped-down version of the draft text for a new UN deal to tackle climate change, released this month.

“We should certainly have a different text for the Paris [climate conference] to become [a] success,” he told the Times of India in a recent interview.

Negotiators from India and the other 190 or so nations involved in cooking up a global agreement due in December will be submitting their suggestions to improve that text fast and furiously in Bonn from October 19–23, at the final round of official negotiations before the Paris summit starts on November 30.

As climate-talks experts point out, the new text will annoy everyone in some way. Yet in spite its brevity, it still includes the major components countries had wanted to see, with the exception perhaps of forest protection and carbon markets.

“It’s a solid foundation to work from,” said Liz Gallagher, leader of the climate diplomacy programme at London-based consultancy E3G. “It’s quite likely that all countries will both love it and hate it, in equal measure.”

Javadekar did not specify what India didn’t like about the current draft, which was distilled by the co-chairs of the talks from around 85 pages down to 20 – or put on the “Atkins Diet”, as Gallagher quipped.

But India has been vocal in the past about the need for adequate financial and technical support for developing countries to cope with climate change and move to lower-carbon economies.

And Delhi often reminds the international community that richer countries must cut down on their consumption and not expect poorer nations to put emissions cuts before economic development.

The chair of the least developed countries group at the climate talks tweeted his disappointment that a proposal by 134 developing countries on tackling loss and damage from climate change – the negative impacts of extreme weather and rising seas that are already happening – had been “ignored” in the new text.

The proposal called for an international mechanism on loss and damage to be included in the legally binding part of the Paris outcome and for the creation of “a climate change displacement coordination facility”, to help those forced to leave their homes by climate impacts, among other things.

Others were relieved to see loss and damage get a section of its own in the proposed draft agreement, but concerned that all the detail had been removed. The text notes that progress is being made on the controversial concept, but more discussion is needed on “content and placement”.

That and other discussions will kick off today with experts expecting countries to react to the new text at the beginning of the session and then get down to work on it line by line.

“Quite a bit was lost [from the previous version] that quite a few states care deeply about, so the question is how much of that they are willing to give up to make the process more efficient,” said Climate Centre Director Maarten van Aalst.

One of the biggest challenges, experts said, is how to ensure a binding process that would oblige countries to ramp up their pledges to cut greenhouse gas emissions sooner than the mid-2020s, because current promises will only limit global warming to around 3 degrees Celsius – higher than the 2 degrees scientists say would avoid the worst consequences of climate change.

“We have not yet closed the ambition gap, and more is going to have to be done coming out of Paris. We need to come back to revisit the level of ambition relatively quickly,” said Alden Meyer, Director of Strategy and Policy for the Union of Concerned Scientists.

Here are some other key things experts say are missing from the new draft text, which could provoke heated debate in Bonn:

*A clear goal to decarbonise the global economy, as G7 leaders have said is needed over the course of this century.

*A commitment to allocate a certain amount or proportion of public climate finance for adaptation.

*Stronger language on the action governments should take to boost their efforts to cut emissions and adapt to climate impacts before 2020, when the new deal is due to take effect, as well as the levels of finance and technology support to be provided to vulnerable countries in that period.

Yet despite the omissions, there are positive elements in the text for humanitarian and development agencies working to protect people from climate change, said Van Aalst.

For example, it recognises “the intrinsic relationship between climate change, poverty eradication and sustainable development”, and makes several references to the need to build resilience to climate change, he said.

It also says adaptation action should follow a gender-sensitive and participatory approach, among other things, “taking into consideration vulnerable groups, communities and ecosystems”.

This would give credence to the fact that adaptation and disaster risk management mainly take place at the local level where more funding is needed, said Van Aalst, whose organisation also works on a UK-funded international programme to boost climate resilience called BRACED.

The text could benefit from mentioning a global deal to step up action to reduce disaster risk, agreed in Sendai, Japan, in March, he added.

Even if connections with the Sendai framework and the recently adopted Sustainable Development Goals were largely symbolic, they would still be important in preventing separate systems from being set up to put each into practice, and encouraging efforts to deal with climate change, disasters and sustainable development as one, van Aalst said.

“It’s in a way better not to try and fix everything in Paris, but to recognise there’s a long process afterwards in terms of implementation,” he said.

A Paris COP 21 apple at the Bonn talks next to the co-chairs of the Ad Hoc Working Group on the Durban Platform for Enhanced Action – the body tasked with reaching international agreement on climate. The special apples will be handed out to senior representatives of each country and the EU in Paris. (Photo: UNFCCC)