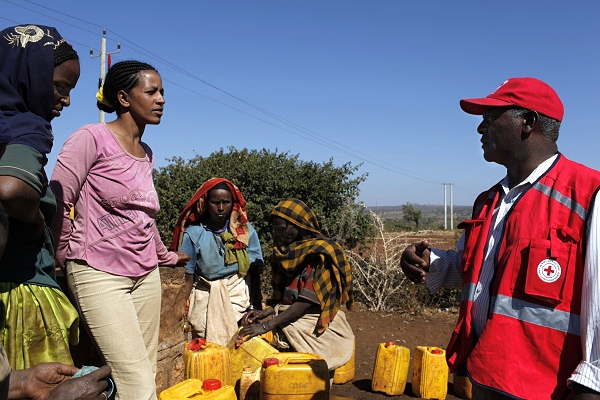 (This is a press release issued by the UN-OCHA Ethiopia Humanitarian Country Team on 13 October. It has been edited very slightly for length. The IFRC library photo is added here.)

The Government of Ethiopia announced this week, during a meeting with UN agencies, NGOs and donor representatives, that the number of people in need of relief assistance in Ethiopia due to the El Niño phenomenon had increased to 8.2 million.

An inter-agency assessment conducted last month and led by the government identified an additional 3.6 million people in need of food assistance (up from 4.55 million in August), as well as 300,000 children in need of specialized nutritious food, and a projected 48,000 more children under five suffering from severe malnutrition.

An addendum to the joint government and humanitarian partners’ mid-year review of the Humanitarian Requirements Document (HRD) was signed to make official the increase in humanitarian needs.

This will enable the government and partners to expedite planning and assistance provision for 2016.

Mitiku Kassa, NDPPC Secretary, explained during the meeting that the government committed some 4 billion Ethiopian birr (US$ 192 million), to address emergency food and non-food needs as a result of failed spring belg and poor summer kiremt rains caused by El Niño.

“El Niño conditions have brought Ethiopia a great challenge, but the government and regional states are ready to meet the needs of the people alongside partners in the international community,” said Mr Kassa.

He added that the government would continue to allocate resources as necessary to meet the needs of the Ethiopian people.

“The challenge we have before us is incredibly serious, and it will take the collective effort of the entire international community to support the government in preventing the worst effects of El Niño now and well into next year,” said John Aylieff, Acting Humanitarian Coordinator and Country Director for the UN World Food Programme.

The number of woredas (districts) prioritized for nutrition interventions increased from 97 in July to 142 in September, and the number of severely malnourished children requiring therapeutic feeding in August reached 43,000.

This is higher than any month in the crisis in the Horn of Africa in 2011.

“Donors have been generous, but if we are to meet the significant needs before us today, and more in the months ahead, we need far more support,” said Paul Handley, OCHA’s Head of Office.

“We count on that generosity to continue.”

The mid-year review of Ethiopia’s HRD, issued on 18 August, listed US$ 432 million in funding requirements with contributions totalling US$ 258 million (or 55 per cent funding).

Factoring in the previous shortfalls with adjusted needs, the 2015 humanitarian requirements were adjusted to US$ 596.4 million, leaving the HRD funded at 43 per cent.

The ongoing effects of the El Niño may further affect the weather patterns this autumn, with Ethiopia’s National Meteorological Agency predicting strong rains along the Omo, Shabelle, and Awash rivers.

This may impact harvests in some areas and cause flooding during the last quarter of the year. In addition to food and nutrition needs, Ethiopia’s HRD outlines emergency requirements in the health, WASH, agriculture and education sectors.

Most sectors saw the figures of those in need increase.

The Ethiopian Red Cross in action in Kebra village, East Hararge, which is no stranger to drought, but the situation this year is exacerbated by El Niño. Current conditions represent “a great challenge”, but national and regional governments and partners in the international community say they are ready to try to meet it. (Library photo: Jose Cendon/IFRC)