Weather and climate information to aid resilience in Vanuatu 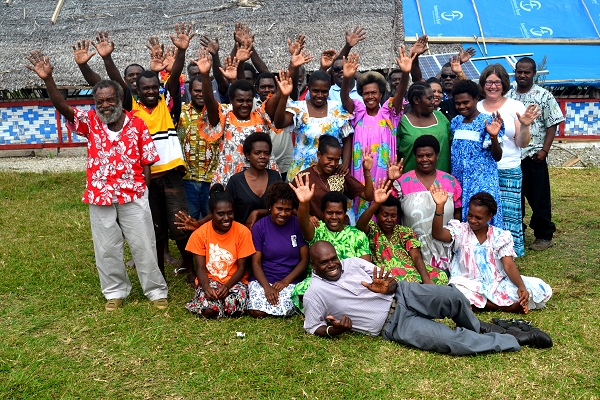 The small Vanuatu village of Epau now has its own draft action plan for climate and disaster resilience.

Thirty representatives from Epau, on Vanuatu’s Efate Island, went back to the drawing board to develop the plan in a joint initiative by the Vanuatu Meterology and Geo-hazards Department (VMGD), the National Disaster Management Office (NDMO), the Vanuatu Red Cross (VRCS), the IFRC, and the Secretariat of the Pacific Regional Environment Programme (SPREP).

A recent week-long workshop was one of the first times these national and regional partners had come together to build understanding by community members of weather and climate information.

The network will help reinforce readiness through early-warning and preparedness work, including space for attention to livelihoods.

The workshop was an important opportunity for learning on both sides. The community learned about how to access, interpret and apply climate, weather and hazard information provided by the government and the Red Cross.

At the same time, more was learned from villagers themselves on how to provide and tailor information to suit the needs of communities in Vanuatu.

Epau is on the east coast of Efate. There are about 140 households in the village and people depend on vegetable gardening for subsistence and cash, fishing, and handicrafts, as well as boats to the nearby Vanuatu capital, Port Vila.

A coastal village, Epau is vulnerable to storm surge and tsunami; heavy rain can cause flooding and health problems, sometimes contaminating water supply; gardens in elevated areas are susceptible to landslides.

Epau was severely affected by Category 5 Cyclone Pam in March; fortunately no lives were lost, but most houses sustained significant damage, and gardens needed for food and income were badly damaged.

The road-market house where households sold vegetables was badly damaged.

A storm surge reached coastal houses, highlighting their vulnerability, but none was lost.

The community want to improve their ability to get and use early-warning information through transistor radios, a community notice board, simulations, and reviving traditional knowledge on hazards.

The workshop was funded through the Finnish-Pacific Project; the IFRC and SPREP are working with the Pacific National Societies to implement projects in various other island nations.

The Vanuatu village of Epau now has a draft action plan for climate and disaster resilience. At a recent workshop villagers decided to improve their ability use early warning information through transistor radios, a community notice board, simulations, and reviving traditional knowledge on hazards.
(Photo: Vanuatu Red Cross)