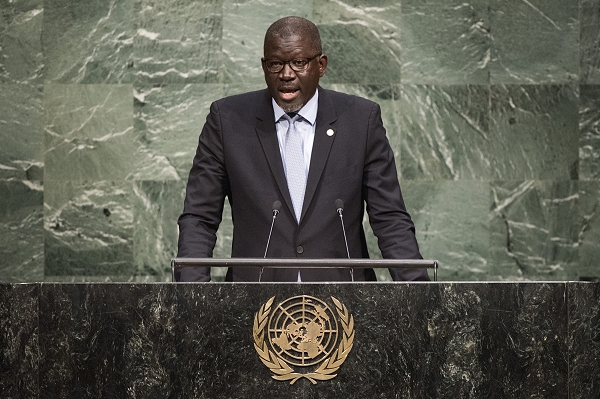 The IFRC in a press release yesterday strongly welcomed the adoption at a special UN summit in New York over the weekend of the 2030 Agenda for Sustainable Development, and pledged the support of its National Societies, 17 million volunteers worldwide, and secretariat in helping to deliver on them.

The ambitious development agenda for humanity post-2015 was adopted at the three-day conference at UN headquarters attended by more than 150 world leaders.

Seventeen new global goals, also known as the Sustainable Development Goals (SDGs), and 169 associated targets were agreed by the 193 Member States of the United Nations.

IFRC Secretary General Elhadj As Sy (photo) told the summit: “We are pleased with the emphasis…on the most vulnerable and most marginalized.

“We welcome as well the strong focus on resilience, recognizing that the risks of disaster, humanitarian crises, and global health epidemics have the potential to reverse hard-won development gains.

“These issues, as well as forced displacement, migration, violence, peace, and human rights and dignity must be addressed if we are to achieve sustainable development.”

Noting that there were now an estimated 250 million people in the world affected by humanitarian crises, he added: “We are seeing an increase in the intensity, frequency and unpredictability of disasters, often as a result of climate change and unplanned urbanization.”

The IFRC has been engaged with the 2030 agenda and the SDGs that underpin it since the process of framing them began; it has called for greater linkages between humanitarian action and development, and an emphasis on ensuring that development benefits everyone, especially the isolated, vulnerable and marginalized.

Emphasizing the key role of National Red Cross and Red Crescent Societies in implementing the agenda, Mr Sy reiterated the importance of their widely trusted presence in communities through their volunteers.

The Red Cross and Red Crescent Movement, he said, was uniquely well placed to drive “meaningful and sustainable changes at the community level, by building and strengthening resilience.”

The IFRC earlier this year announced the One Billion Coalition for Resilience.

“‘Resilience’ is a key feature of the post-2015 landscape,” said Climate Centre Director Maarten van Aalst, who was also in New York.

“It’s prominent in the first of the new goals, on ending extreme poverty, but also in the second, on hunger, in goal 11 on cities, and of course in goal 13 on climate change.”

In speeches this weekend many world leaders stressed that unless climate change is tackled, progress on many other goals will be difficult.

A new report – Zero poverty, zero emissions. Eradicating extreme poverty in the climate crisis – launched at the weekend by the UK think tank, the Overseas Development Institute, meanwhile, argued that catastrophic climate change could plunge more than 700 million people back into extreme poverty.

Speaking at Climate Week, which ran in parallel with the SDG summit in New York, author Ilmi Granoff said: “Poverty eradication cannot be maintained without deep cuts from the big greenhouse-gas emitters.”

Goal 13 calls for “urgent action to combat climate change and its impacts” and includes a specific target to strengthen resilience and adaptive capacity.

Acknowledging the link between the global goals and the coming COP 21 UN climate talks in Paris, UN Secretary-General Ban Ki Moon noted a consensus that the Paris agreement “must strengthen resilience to climate impacts, with a focus on the poorest and most vulnerable”.

He said the Paris agreement would be “the floor, not the ceiling, for collective ambition”.

‘Impacts on the ground’

“Extreme weather and disaster risks are escalating and are now recurrent,” according to Aby Drame of ENDA Energie – a member of the knowledge-management consortium in the UK-supported BRACED* programme that also includes the Climate Centre.

“This amplifies imbalances and jeopardizes opportunities for sustainable development,” she said in remarks on behalf of civil society at a high-level dialogue on climate chaired by Presidents Hollande of France and Humala of Peru.

Drame also highlighted the need to focus on local practices to adapt to climate change while preserving ecosystems, and support the adaptive capacity and resilience of communities.

“Programmes such as Partners for Resilience and BRACED are at the front line of this work, with the same emphasis on resilience as key to development, focusing on the most vulnerable groups including women and children,” Van Aalst added.

“We have much to offer to the many actors now eager to get to work on implementing the new goals – through our impacts on the ground and lessons learned on how to actually achieve those impacts.”

IFRC Secretary General Elhadj As Sy addresses the special UN summit in New York on sustainable development post-2015. He pledged the support of National Societies, 17 million volunteers worldwide, and the IFRC secretariat in helping to deliver on them. (UN photo: Kim Haughton)

*Building Resilience and Adaptation to Climate Extremes and Disasters