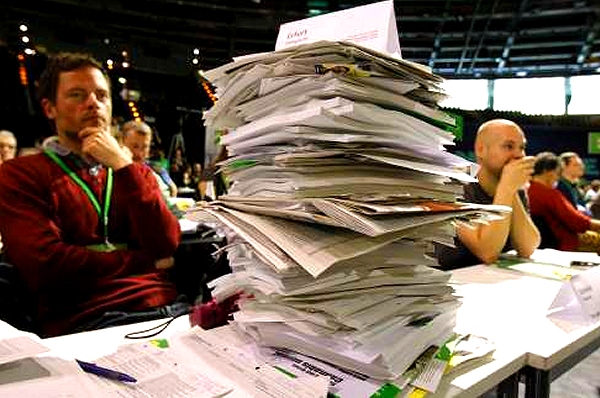 For a city planner looking to make a new building flood-proof, or a farmer interested in trying out new drought-resistant seed, there is no shortage of climate change information available.

The problem, often, is that there is too much of it – and that it’s on too many different websites, and is not easy to understand or figure out how to use.

“We pour this jug of information over people’s heads and hope it sticks,” said Roger Street, the director of adaptation science at UKCIP, the United Kingdom Climate Impacts Programme.

So, as an ever-wider range of people find themselves dealing with climate change-related problems, putting that information together in a form that people can grasp and relate to is crucial to making good climate policy and decisions, argues an emerging group of “climate-knowledge brokers”.

Right now, “it’s profoundly confusing to know where to go to get decent climate information,” says Geoff Barnard, who helps lead the brokers group, backed by the UK-based Climate and Development Knowledge Network (CDKN) and the Renewable Energy and Energy Efficiency Partnership (REEEP) based in Vienna.

“Who do you trust? Where do you get things that genuinely speak to what you’re doing?” he asked at a gathering on Thursday in London to launch the “Climate Knowledge Brokers Manifesto”.

The report, based on interviews with more than 80 users of climate information, aims to create a roadmap to make sure good information gets to the people who need it.

In the future, “many more people will need to make decisions based on good climate information,” said Florian Bauer, head of open knowledge at REEEP.

The goal, he said, is “to end up with people who can make informed decisions with the best, high-quality information.”

So what does useful climate information look like? It pulls together data from the best sources, and puts it in context, the report argues. It’s in language the audience can understand. And it’s crafted with an eye to what the intended user actually needs.

“It’s no use just providing people with information if they don’t accept it and learn it, if they can’t use it. Then you have failed as a knowledge manager,” said James Smith, a strategic planner with REEEP.

For instance an effort by the Humanitarian Futures Programme at King’s College London to deliver good seasonal forecasts to farmers in Africa was quickly taken up in some countries, said Vicky Pope, head of integration and growth at the UK Met Office.

But in others, where farmers looked more to traditional knowledge than forecasts for planting advice, the new forecasts, to be effective, had to be paired with and put in the context of natural signals farmers were used to consulting, she said.

In Bangladesh, similarly, efforts by the International Center for Climate Change and Development (ICCCAD) to get good climate information effectively to national planners have required more than just putting out data, said Clare Stott, a former ICCCAD researcher.

Instead, it's taken monthly face-to-face “learning events” with the country’s planning commission – and making sure the information gets to the Ministry of Finance, she said.

Part of the challenge of creating useful information on climate change is that some of it needs to be created now for future users who haven't yet seen climate impacts on their work and “don’t know they need it yet”, Bauer said.

Another is producing information that focuses less on climate change itself, and more on the effects it will have on a wide range of other areas: agriculture, water, health, national budgets.

What is clear, Bauer said, is that demand for high-quality, useable information on climate impacts is growing fast as “almost everybody is becoming a climate decision maker.

“There’s a massive job out there to be done that we're just starting on,” Barnard said.

Documents piled up during the April 2013 congress of Germany’s Green Party in Berlin. (Photo: Tobias Schwarz/Reuters via Thomson Reuters Foundation)