‘The rains are different now’: Demonstrating climate services for farmers in Tanzania 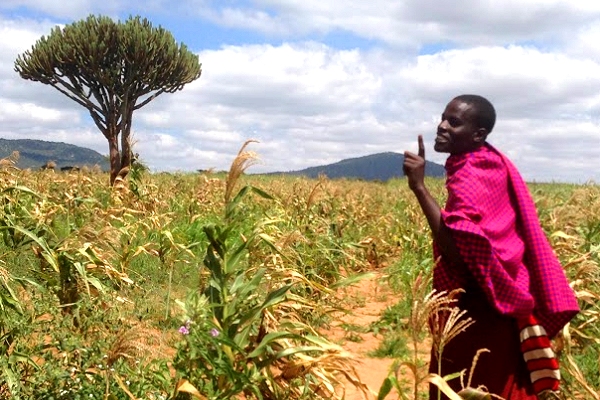 “The rains are different now. Twenty years ago we could plan for harvests. We knew what to expect.”

The words of Olendimama Olendimama, a 35-year-old farmer from Ndaleta – a small community in central Tanzania’s Kiteto district, south of Arusha.

Pointing to the sky, he wonders about prospects for the current rainy season, and hopes for a return to the more reliable weather patterns of yesteryear.

Now, facing the risk of drought, Olendimama and others in his community are intrigued by the idea of incorporating modern climate information into agricultural planning.

Through the Global Framework for Climate Services (GFCS), the Climate Centre has been advising the Tanzania Red Cross Society (TRCS) on ways to incorporate climate information into decision-making by communities.

The GFCS is a UN initiative developed by at least 13 states and led by the World Meteorological Organization to assist with the application of science-based climate services in climate-sensitive sectors.

A GFCS goal in Tanzania is to strengthen the relationship between the Tanzania Meteorological Agency (TMA) and national decision-making bodies, as well as encouraging a “climate smart” National Society.

The TRCS is a key partner in the distribution of climate information, including seasonal forecasts of rainfall valuable in the target districts of Longido and Kiteto, where farmers have long used natural signals like the behaviour of animals and birds in weather forecasting.

“We in the TRCS have been collaborating with the Tanzania Meteorological Agency for more than 10 years,” said Renatus Mkaruka, TRCS Project Coordinator at the National Society’s Dar es Salaam headquarters. “But with GFCS we have seen this partnership become stronger.

“We have invited TMA experts to conduct training seminars in Kiteto twice, and this has helped create awareness of communities of the impacts of climate on their livelihoods.”

One way in which trust in up-to-date climate science is being built is through “demonstration plots” – sections of fields cultivated using the forecasts, advisories and weather warnings produced by the TMA and disseminated by Red Cross volunteers.

Strolling through amber-tinted maize fields, Olendimama describes the difference between the demonstration and traditional plots: “This is the area that we planted going by the seasonal and ten-day forecasts.”

Specific actions taken by farmers on the demonstration plot include delaying weeding when rains were forecast to be late to keep moisture in the soil, and also planting later.

“You can see the difference,” says Olendimama. “Look, here the maize is bigger and the leaves are wilting less.”

Promising anecdotal results from current work – if and when confirmed with evaluative data – will be incorporated into planning for the remaining 18 months of GFCS in Tanzania.

Olendimama Olendimama shows off his demonstration plot, cultivated using modern scientific forecasts and advisories, where “the maize is bigger and the leaves are wilting less”. The plot is part of the Global Framework for Climate Services in Tanzania. (Photo: Andrew Kruczkiewicz/Climate Centre)